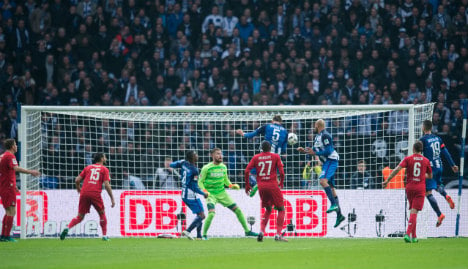 Hertha BSC fans have come in for criticism for a banner they held at a home match against Cologne on Saturday at the Olympic Stadium in Berlin, the Berliner Morgenpost reports.

Hertha BSC, the capital’s top football team, won the match 2-1. They are currently third in the Bundesliga table.

The banner, which was directed at the Cologne ultra-fan group Die Wilde Horde 1996, was met with strong disapproval on social media.

“Leave out the stupidity! Hertha Berlin has always distanced itself from every form of discrimination,” the club itself tweeted.

The German football magazine “11 Freunde” also made their stance on the sign clear, tweeting: “A pity, Hertha, everything thrown away again.”

The banner was part of an ongoing rivalry between the two teams’ fan groups.

Last season, Hertha's Harlekins Ultras announced on their website that some of their members had had children, saying they were “proud” that the ultra-group now had “11 happy fathers and one happy mother”.

The announcement was mocked by the Wilde Horde, who unveiled a banner for the teams' next game implying that the one woman had been mother to eleven men's children.

The Harlekins Ultras' attempt at revenge was an apparent reference to the issue of gay marriage and adoption, mocking Cologne’s reputation as a gay-friendly city.

Hertha BSC has previously been seen to have some of the more progressive football fans, and was the first club to found a gay and lesbian fan club – called the Hertha-Junxx – in 2001.

Hertha Harlekins posted a photo on Monday on their website to show their condemnation of the banner. The photograph depicts one of their banners from 2006, which read “Ja zur Homoehe!” (“Yes to gay marriage!”).