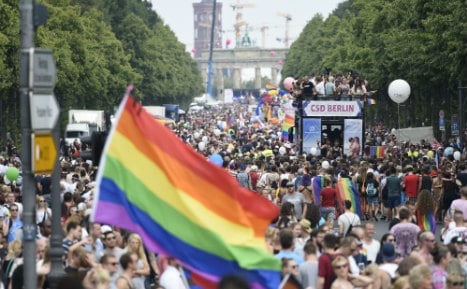 The survey by Berlin startup Dalia published this week found that 5.9 percent of Europeans identify as LGBT when offered a choice between heterosexual or LGBT. The proportion was highest in Germany, where 7.4 percent of respondents identified as LGBT, and lowest in Hungary, at 1.5 percent.

But when the survey asked people to select their orientation somewhere along a scale, the proportion across Europe who identified as something other than heterosexual was almost twice as high, at 10 percent.

The survey asked a representative sample of 12,000 respondents about their sexual orientation. It was conducted anonymously via the internet, a methodology which Dalia claims encourages respondents to answer more honestly than in face-to-face or phone interviews.

The survey found that women were more likely to identify as LGBT than men across Europe, although results varied strongly from country to country.

The biggest difference was seen in the Netherlands where 10.3 percent of women identified as LGBT, but only 2.5 percent of men.

The survey also noted a significant difference in answers dependent on age. Slightly under 12 percent of people in Germany aged 14 to 29 identified as LGBT, while roughly 6 percent of those aged 30 to 65 did so.

The survey authors caution that measuring the size of the LGBT community is “notoriously difficult”, noting that 8 percent of people refused to answer whether they identify as LGBT, while 12 percent refused to describe their sexual orientation.

However, they assert that the level of anonymity provided to respondents gave them a more accurate results than previous surveys of this kind.