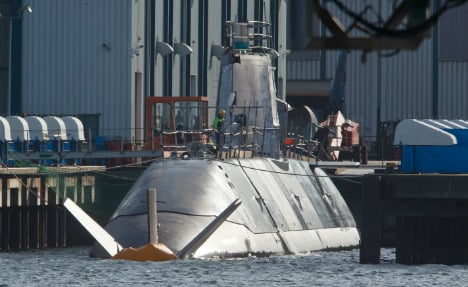 The Maariv daily said the planned purchase aims to replace within the next decade the oldest vessels in its existing Dolphin fleet, which began entering service in 1999.

Contacted by AFP, the Israeli defence ministry declined to comment on the report.

Israel already has five of the state-of-the-art German submarines, with a sixth due for delivery in 2017, Maariv said.

Foreign military sources say the Dolphins can be equipped with missiles armed with nuclear warheads.

They say Israel has between 100 and 200 warheads and missiles capable of delivering them.

Israel is the Middle East's sole if undeclared nuclear power, refusing to confirm or deny it has such weapons.

“The new submarines are said to be more advanced, longer, and equipped with better accessories,” Maariv said.

German Chancellor Angela Merkel's office said at the time all submarines had been delivered to Israel unarmed.

“The federal government will not speculate on subsequent arming,” spokesman Steffen Seibert said then.