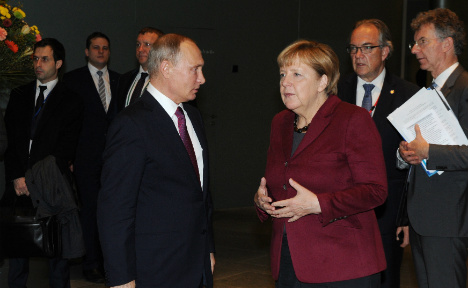 Merkel condemned the air raids carried out by Russia and the Syrian government on Syria's second city of Aleppo as “inhumane and cruel”, after a meeting with Hollande and Russian President Vladimir Putin in Berlin.

Describing the late night talks as “very tough”, Merkel said they “gave Germany the clear chance to define what constitutes a war crime. Bombardments are inhumane and a cruel experience for the people”.

It was Putin's first visit to Berlin since Russia annexed Ukraine's Crimean Peninsula in 2014, sending relations with the West plunging to their lowest point since the Cold War.

While the primary aim of the visit was to discuss the Ukraine conflict, it was confirmed on Tuesday that the Syrian civil war was also on the table.

Hollande told Putin bluntly that “what is happening in Aleppo is a war crime, one of the first demands is that the bombardments by the regime and its [Russian] backers must end”.

Both leaders warned that they could not exclude imposing sanctions on Russia, hours ahead of an EU summit where Russia's role in Syria is set to be discussed.

“Everything that can constitute a threat can be useful,” Hollande said at a press conference, while Merkel added that “we cannot remove this option”.

In response, Putin said Thursday he was ready to prolong a unilateral ceasefire in Aleppo.

Putin said he told the European leaders that Russia was “intending to extend as far as possible” a halt to its air raids in Syria's second city, in order to allow civilians and rebels to leave the devastated city.

A pause in Russian and Syrian strikes on Aleppo held for a second day Wednesday, ahead of the brief unilateral ceasefire that started Thursday morning.

Ahead of the talks in Berlin, Moscow announced it would prolong the truce from eight to 11 hours, and said Syrian and Russian warplanes were giving Aleppo a wide berth.

But its plan has stirred scepticism in the West and UN envoy Staffan de Mistura said the truce would just be long enough to safely evacuate only 200 wounded from the devastated east of the city.

'No miracles' at Ukraine talks

Merkel said “no miracles” were achieved on the Ukraine crisis, but talks with the country's leader and his Russian and French counterparts did lead to some progress on ending a deadlock in the peace process.

After a five-hour summit billed as “difficult”, Ukrainian President Petro Poroshenko said all sides had agreed to draw up a roadmap for applying the frayed 2015 Minsk peace accords following months of impasse.

“Between now and the end of November we have to approve a roadmap. It will be a document on the implementation of all the Minsk accords,” he said in a press conference after the Berlin gathering, according to Russian news agencies.

Merkel said at a separate press conference that the talks “didn't achieve miracles” but that progress was made “with the creation of a so-called roadmap”.

“There's much work left to do,” she added, flanked by Hollande.

Putin stressed that the Minsk accords remained the best path towards a lasting resolution to war in eastern Ukraine.

The EU summit in Brussels starting on Thursday will discuss relations with Russia, and European leaders are set to consider the question of sanctions over Ukraine, which come up for renewal at the end of the year.

The roadmap agreed to in Berlin will be now be further thrashed out and discussed by the countries' foreign ministers, the leaders said.

“You have to respect the successive steps of the Minsk accords,” Hollande told reporters.

But it denies accusations that it has sent troops and weapons across its border with Ukraine to fuel the conflict.

The Minsk accords, signed in February 2015 with French and German mediation, call for a ceasefire along with a range of political, economic and social measures to end the conflict between Ukrainian troops and pro-Russian rebels.

While the accords reduced the intensity of fighting, they have failed to stop it.

On a key sticking point – the issue of holding possible local elections in rebel-run regions, Poroshenko said no polls could take place without “the unconditional withdrawal of foreign armed forces”.

Putin for his part wants partial autonomy for rebel-held parts of eastern Ukraine like Donbass and Lugansk, while Kiev wants reassurances that fair and free elections would be held there.

None of the four leaders meeting in Berlin had expected a breakthrough, but Germany and France had argued that it was important to return to the negotiating table more than a year after the Minsk agreements were signed.

Putin, speaking separately to reporters after the talks, was vague on the details of the roadmap but confirmed that the four were in favour of widening the role of the European OSCE observer mission.

According to Poroshenko, that meant an agreement had been reached on deploying an armed OSCE mission to the east.

Putin, who wants to assure the supply of provisions to rebel regions, said the talks had focused heavily on security matters but on humanitarian issues “we unfortunately didn't make much progress”.