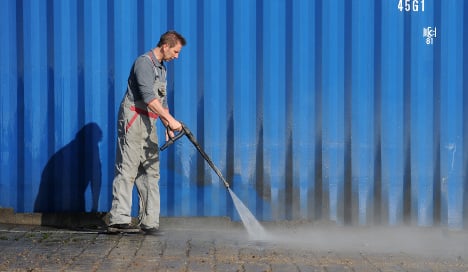 The name Kärcher entered French political language in 2005 when the then interior minister Nicolas Sarkozy visited a Parisian suburb where an 11-year-old boy had been shot dead.

He promised residents a crackdown on crime, saying: “Starting tomorrow, we're going to clean this estate with Kärchers.”

The company says that even 11 years later its name has been used “in association with a political, controversial or negative issue” and said it “harms our company, its values and its clients”.

Sarkozy, who was president from 2007 to 2012, is bidding to win the right-wing nomination to make a bid to regain the presidency.

In a letter sent to Alain Juppe, who is leading Sarkozy in the right-wing field, Kärcher said: “For several months, we have noticed that our company's name has been regularly used on the political scene, in relation to subjects which are sensitive to say the least.”

The letter went on: “We hope you will help bring a stop to this trend by respecting our trademarks and by only using the term Kärcher to refer to our products.”

Juppe's right-hand man Gilles Boyer posted the letter on Twitter, adding the comment: “I understand your concerns but I think you have sent it to the wrong person.”

Sarkozy, Juppe and five other candidates will battle it out for the right-wing nomination in a two-round primary next month.