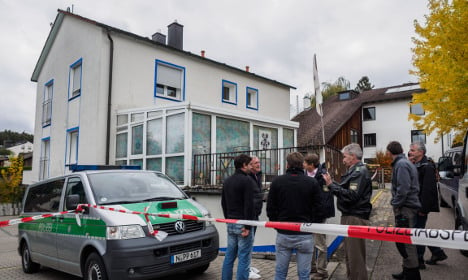 Police outside the home of the self-declared 'Reichsbürger', who shot at police during a raid on Wednesday. Photo: DPA.

During a police raid in Georgensgmünd, Bavaria on Wednesday morning, a member of a right-wing extremist movement immediately opened fire and injured four police officers, one of whom has since died due to his injuries, police said on Thursday morning.

Police had originally reported the officer's death on Wednesday evening, only to send out a second press release later in the evening stating that he had not died.

A second officer sustained a bullet wound to the arm, while two more were injured by shattering glass.

The shooter himself – who was wearing a protective vest – was lightly injured in the raid and arrested by police.

The 49-year-old shooter is reportedly part of a “Reichsbürger” movement – people who do not recognize the Federal Republic of Germany as a legitimate state, and who tend to believe the true borders of Germany are those that existed prior to the Second World War.

Local authorities had called for the raid to seize the man's 31 firearms, which he legally possessed, because he was no longer deemed to be “safe” in possessing them, the Bavarian interior ministry explained.

Authorities had previously declared his hunting license and weapons possession permit invalid, after he first came to officials' attention last summer during an inspection of his firearms storage, as per Germany's strict gun control regulations.

The man, who used to run a martial arts school, now faces charges of attempted murder for the shooting on Wednesday.

“I am appalled by this case,” said Bavaria's interior minister Joachim Herrmann earlier on Wednesday, adding that the Reichsbürger movement in Bavaria should now be subjected to a “thorough review”.

People who are part of the Reichsbürger scene assert that the German Reich, or even Prussia, still exists, with some groups establishing their own “government”. German intelligence considers a number of Reichsbürger to be part of the right-wing extremist scene and has been monitoring them.

German domestic intelligence does not have an official count of the number of Reichsbürger in Germany.

Because Reichsbürger do not recognize the laws of the German state, they often come into conflict with authorities for refusing to pay taxes or forging their own forms of identification.

After authorities first sought to examine the man's weapons earlier this year, he wrote a letter to local officials, declaring himself a Reichsbürger and explaining that he would not comply with the government's laws. In May, he also refused to pay a vehicle tax.

In August, a former Mr. Germany beauty king engaged in a violent conflict with police after he refused to be evicted for a debt on his property, and more than a dozen of his Reichsbürger comrades exchanged gunfire with officers.

The self-proclaimed “King of Germany”, Peter Fitzek, continues to grab headlines after he established his own “kingdom” in 2012 and started creating his own currency, founding a bank, and distributing passports to his “citizens”, among other things. Since then he has been arrested eight times for driving without a proper license.