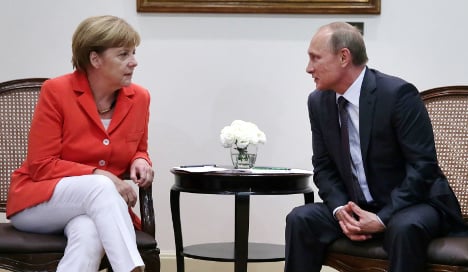 France on Tuesday confirmed that the French, Russian and German leaders will hold a “working meeting” on the Syrian crisis in Berlin, in addition to discussing the ongoing conflict in Ukraine with the country's president, Petro Poroshenko.

Host Chancellor Angela Merkel said the Ukraine talks would be aimed at “offering a brutally honest assessment” of progress on implementing the frayed Minsk peace accords for Ukraine.

“Things are stalled in many areas such as the ceasefire, political issues and humanitarian issues,” she told reporters on Tuesday.

“We have to seize every chance we have for progress. I have to say that we cannot expect a miracle but it is worth every effort at this point.”

Putin has not visited the German capital since Russia annexed Ukraine's Crimean Peninsula in 2014, sending relations with the West plunging to their lowest point since the Cold War.

Russia's involvement in the Syrian civil war, which has deepened the diplomatic freeze, will also figure at the top of the agenda, Merkel said.

Speaking of the “disastrous” situation in the besieged city of Aleppo, Merkel said she and French President Francois Hollande would speak to Putin “about somehow alleviating people's suffering”.

“Here too, we cannot expect miracles but it is essential to talk, even if the views are far apart,” she said.

The gathering will be aimed at “giving the same message to Vladimir Putin on Syria: a durable ceasefire in Aleppo and humanitarian access so that the devastation of this city can end,” an aide to Hollande said in Paris.

Syria's second city, held by rebels determined to oust President Bashar al-Assad, has come under heavy bombardment since the Russia-backed military announced an offensive in late September to regain control of the east.

Air strikes in the city have flattened numerous residential buildings and civilian facilities, in a bombing campaign the European Union warned could amount to war crimes.

The Berlin meeting takes place on the eve of a European Union summit in Brussels on relations with Russia, including sanctions over Ukraine, which come up for renewal at the end of the year.

The two-day Brussels talks are also expected to cover Russia's role in Syria, which sparked a furious row between Russia and France last week, prompting Putin to cancel a visit to Paris.

The last four-way summit in the so-called Normandy Format took place in Paris in October 2015.

Hollande's office said in a statement that Wednesday's gathering would “discuss the next steps in the process towards ending the crisis in eastern Ukraine”.

Russia backs a separatist, pro-Moscow insurgency in the region that has claimed nearly 10,000 lives.

But it denies accusations that it has sent troops and weapons across its border with Ukraine to fuel the conflict.

In the run-up to the meeting, Moscow and Kiev swapped recriminations.

Kremlin spokesman Dmitry Peskov said Putin believed there was “no alternative” to implementing the Minsk accords.

“We know that on this point, the situation leaves much to be desired,” he said. “For the moment, Kiev is doing nothing.”

Ukrainian President Petro Poroshenko indicated he had little hope for progress in Berlin.

“Let's not have very high expectations on this meeting,” he said Tuesday on a visit to Oslo.

Germany currently holds the rotating presidency of the Organization for Security and Cooperation in Europe (OSCE), which has monitors in eastern Ukraine.