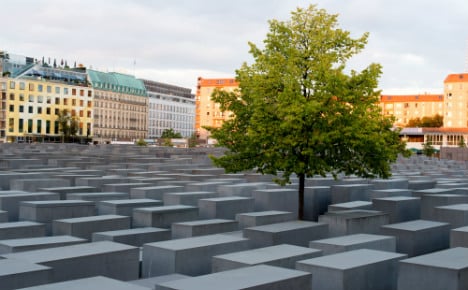 The Memorial to the Murdered Jews of Europe, Berlin. Photo: DPA

On October 18th 1941, a train steamed out of Grunewald station in western Berlin. On board were around 1,000 people classified by the Nazis as Jews, who in the official jargon were being “deported” or “resettled”, the Berliner Morgenpost reports.

This was the first of 184 trains that would depart from the German capital over the next four years, transporting around 55,000 Jews to Theresienstadt and other concentration camps and ghettos. The majority didn't survive the war.

Failing to 'cope with the past'

The Holocaust – originating from the Greek words meaning “whole” and “burnt” – was the persecution and murder of more than six million Jews and others from oppressed minorities in Europe between 1941 and 1945.

Although a large proportion of the murders were committed outside of the borders of contemporary Germany – the most infamous camp, Auschwitz, for example, now lies in Poland – Germany has a particular responsibility to ensure that the genocide is not forgotten.

After the Second World War and up until 1990, Germany was divided into the FRG (West Germany) and the Soviet-allied GDR (East Germany), and both states struggled to come to terms with the horrors of the past at a national level.

The term Vergangenheitsbewältigung, which literally translates as “coping with the past”, has become a key concept in post-1945 German culture, and describes the way in which Germans discuss and confront their history.

The former Cold War communist state of East Germany did not accept culpability for the Nazi past, stating that it was instead a result of Western capitalism. West Germany, although confronting the past more directly, also struggled with the process of denazification and memorialisation.

Since reunification in 1990, much more has been done by Germany to remember the atrocities of the 1940s. It is noticeable that the majority of the memorials in Berlin have only emerged over the last 25 years. On the 50th anniversary of the liberation of the Auschwitz concentration camp, January 27th 1995, many in Germany decided to dedicate the day to remembering the Holocaust. The following year, the day was sanctioned as an official national day of remembrance.

Through this process, the newly united Germany had shown itself to be taking a new and progressive approach towards remembering its National Socialist past.

In the German capital, this day is commemorated through the laying of wreaths at memorials throughout the city.

Memorial to the Murdered Jews of Europe

The German government also decided to commemorate the Holocaust in more physical ways. The Memorial to the Murdered Jews of Europe, commissioned by the Bundestag (German parliament) in 1999, was completed and opened in 2005. This controversial monument is located just one block south of the iconic Brandenburg Gate in central Berlin.

Visitors walk through the Holocaust Memorial in Berlin. Photo: DPA

It comprises 2,711 concrete slabs of the same width and length, but of varying heights, in a grid formation, allowing visitors to walk through the installation. The memorial has however been criticized for failing to address the suffering of the individual victims, as the monument is anonymous.

The architect who designed it, Peter Eisenman, responded that “in this monument there is no goal, no end… the duration of an individual’s experience of it grants not further understanding, since understanding is impossible”.

But beneath the memorial, there is a lesser known Information Centre, which attempts to provide a different experience. The Room of Names inside intends to “release the victims from their anonymity” by reading out biographies of Jews murdered in the Holocaust – a process which, if completed for all victims, would take over six years. The project is still collecting names and stories of the victims.

Memorials to other minorities

The Memorial to the Murdered Jews of Europe has also faced criticism for not commemorating other groups that were persecuted in the Holocaust. In the years since 2005, there has been a concerted effort to address the other minorities, and three other significant memorials now exist in Berlin.

A man looks into the memorial at a television screen, showing two men kissing at The Memorial to Homosexuals Persecuted Under Nazism. Photo: DPA

All located in the Tiergarten in central Berlin and freely accessible 24 hours a day, these memorials are an important demonstration of Germany’s understanding of the range of groups persecuted by the Nazis.

Memorial to the Sinti and Roma Victims of National Socialism in the Tiergarten. Photo: Rolf Krahl / Wikimedia Commons

In contrast to these large-scale state-sponsored projects of the last two decades, Gunter Demnig’s Stolpersteine, or “stumbling blocks”, remember the Holocaust in a more intimate and personal way.

The project, begun by the German artist in 1992, commemorates victims on cobble stone-sized brass plates inscribed with their name and available information about, for example, where they were killed. These blocks are then installed in the pavement at their last known residence.

Not without controversy, they are still prohibited in Munich, as some of the prominent members of the Jewish community there felt that they were disrespectful. Charlotte Knobloch, who was the President of Central Council of Jews in Germany from 2006 until 2010, has described them as a “neurotic artistic performance act to create so-called memorials in the dirt”. But they have also received a great amount of support, both in Germany and internationally. Now spread across 21 European countries, over 60,000 Stolpersteine have been laid, making it the largest decentralised memorial in the world.

In Berlin, over 7,000 stumbling blocks have been laid. The University of Applied Sciences in Potsdam has created an interactive map showing all their locations and those of other monuments in Berlin.

Two other memorials in Berlin employ similarly unconventional methods to commemorate and provoke thought about the Holocaust.

Architect Daniel Libeskind’s extension to the Jewish Museum, completed in 1999, uses architecture – voids, corridors, towers, and outdoor space – to evoke an emotional reaction from the visitor. One room, the Memory Void, contains 10,000 faces punched out of steel. The Jewish Museum's 'Shalekhet: Fallen Leaves' is an installation on the ground of the 'Memory Void', consisting of 10,000 faces punched out of steel. Photo: Superchilum / Wikimedia Commons.

The other is the Orte des Erinnerns (Places of Remembrance) in the area around Bayerischer Platz in the Schöneberg district.

This shocking and provocative memorial, created in 1992, consists of 80 different signs on lampposts, each displaying a different anti-Semitic law or announcement made in Nazi Germany. These include “Jewish doctors are no longer permitted to practice” and “The baptism or conversion of Jews to Christianity has no relevance to the race question”.

The memorial is an emotive reminder of the daily discrimination and hardship that Jews had to undergo from 1933 to 1945. One of the signs in Bayerisches Viertel, transalating as “Jewish youths are forbidden to walk around in groups of larger than 20 people”. Photo: Manfred Brueckels / Wikimedia Commons

These are just a few examples of how Germany commemorates the Holocaust in Berlin, omitting the concentration camps across Germany that have been preserved as museums or turned into memorials, as well as smaller, often more intimate monuments that can be found throughout all sixteen states.

These examples are also mainly physical ones, and do not take into account the wider intellectual and artistic ways in which Germans try to commemorate the atrocities.

They do nonetheless demonstrate Germany’s forward-thinking attitude towards commemoration that has developed over the last quarter century, and contribute to the vital public history of Germany’s 20th century past.