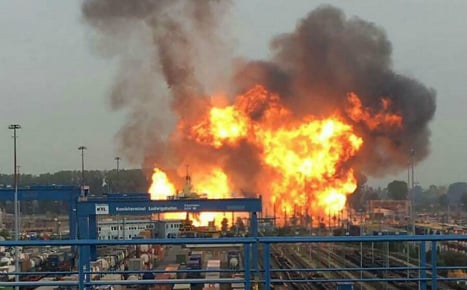 The fire at Ludwigshafen. Photo: DPA

Fire crews are continuing the search at the site of the explosion at a BASF chemical plant in Ludwigshafen, a spokesperson for the company said on Tuesday morning.

The explosion occurred around 11:30 am and triggered a huge fire during work on a pipeline that transports raw materials.

Six other people were seriously injured in the blast, the global chemicals giant said on its Twitter account.

According to Bild, over 150 fire personnel remain in operation at the site of the blast. At this stage though, it remains extremely difficult for the fire crews to approach the vicinity of the explosion.

Police also confirmed that fire crews had quelled the last of the flames in the early hours of the morning. Residents of the town on the Rhine river were nonetheless told to keep their windows and doors closed.

By Tuesday morning, the cause of the explosion remained unknown.

On its website, the company describes the site as a “very important for BASF's supply of raw materials”, where more than 2.6 million tonnes are handled each year.
The goods are unloaded from ships into the production plants via a system of pipelines.

The company employs 36,000 people in Ludwigshafen.

BASF also suffered a second, smaller incident at its nearby Lampertheim plant on Monday where four people were injured in a gas explosion. The company said the two incidents were not related.

BASF employs over 110,000 employees worldwide, with sales of more than €70 billion last year.