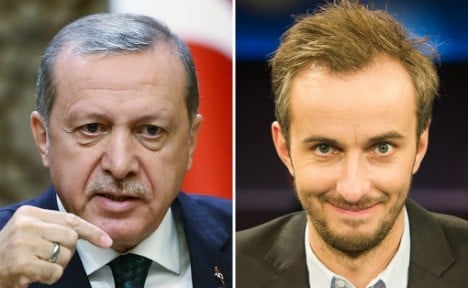 “It is questionable whether the performance could be characterized as an actual insult or disrespect against the Turkish President,” the attorney general in Koblenz said in a statement published on Friday.

The statement went on to say that Böhmermann's poem needed to be understood in the context in which the comedian had presented it and not be taken alone. It thus upheld a decision by prosecutors in Mainz on October 4th to drop the case, a decision Erdogan had appealed against.

In the poem Böhmermann read out on his late night TV show, Neo Magazin Royale, in late March, the comedian described the Turkish leader as someone who has sex with goats and watches child pornography, among other insults.

The Turkish government complained and invoked paragraph 103 of the German Criminal Code, under which insulting a foreign head of state can result in a three-year jail term. If the insult is an intended slander, the sentence can stretch to five years.

Chancellor Angela Merkel faced stinging criticism in the German media for consenting to the investigation into the “smear poem”.

The comedian defended himself by claiming the poem was not intended literally and should be understood in its proper context.

Böhmermann made clear before reading the poem that what he was about to do was prohibited in Germany. The recital was a response to threats from Erdogan to take legal action against a different comedy show which had mocked his human rights record.

The Turkish president now has the final option of forcing the case to be ruled upon by a judge in the high court in the western state of Rhineland-Palatinate. He has a month to pursue this option.

Erdogan has also filed a separate private suit against Böhmermann, which will be heard in November in Hamburg. The Hamburg court in May already banned Böhmermann from publicly reciting passages of his poem.