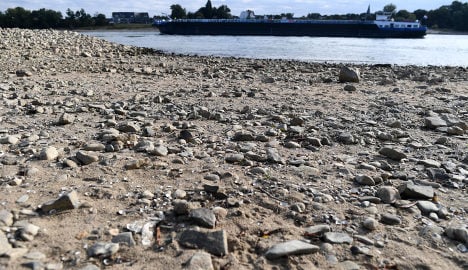 The Rhine’s water level between Bonn and Duisburg, North Rhine-Westphalia, measured this week at 2.14 metres – less than half of its normal depth of 4.33.

Dozens of ships have gotten stuck trying to navigate along the low waters of the Rhine within the past two weeks, according to Duisburg water protection police.

“That is significantly more than during normal water levels,” a water protection police spokesman said on Thursday.

The low water levels make the waterway narrower, which in turn means river vessels have less space. Some end up inadvertently navigating too far and getting stuck, according to police.

And sometimes low levels force ship captains to unload and leave behind some of their cargo because navigating with a full load would not be possible. This means that other ships must then later transport the discharged goods.

And while September, October and November are generally particularly low-water months for the river, “when you compare the current level with those of the last 20 to 30 years, this is a very low water level,” explained hydrologist Jan Böhme of the Duisburg-Rhein Waterway and Shipping Agency (WSA).

Since July, Böhme said that the river’s levels have continued to decrease, and this weekend the situation could get even worse: Böhme told WAZ that by Sunday, it could sink below the two-metre mark.

The lowest level the Rhine has reached in Duisburg was 1.74 metres in 2003.

But even then, Böhme said the Rhine was not officially closed for transport.

“Ship captains must always take responsibility for themselves and decide whether they can navigate it or not.”

In June, the Rhine’s water levels became too high for shipping after heavy rain, leading officials to close the waterway, according to Reuters.