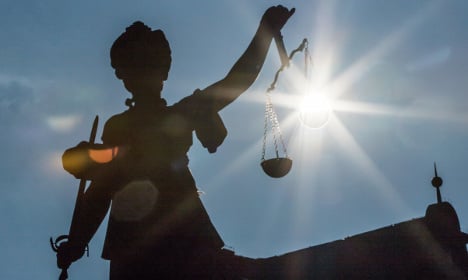 The Fountain of Justice in Frankfurt. Photo: DPA.

Between 1949 and 1973, 90 of the West German Justice Ministry’s 170 leading judges and lawyers were former members of the Nazi party, according to the government report.

“There was very large continuity,” former Justice Minister Sabine Leutheusser-Schnarrenberger – who had commissioned the study while in office – told broadcaster Deutschlandfunk on Monday.

Of those 90, 34 had been members of the Nazi party’s original paramilitary SA group, which helped Adolf Hitler rise to power and participated in the bloody Night of the Broken Glass (also known as Kristallnacht) that killed an estimated 91 Jewish people.

In 1957 alone, 77 percent of senior ministry officials were former members of Hitler's party, a higher proportion even than during the 1933-45 Third Reich, the study found.

“We didn't expect the figure to be this high,” said study co-author Christoph Safferling, who evaluated former ministry personnel files, speaking to the daily Süddeutsche Zeitung.

The fascist old-boys network closed ranks, enabling its members to shield each other from justice, the study found – helping explain why so few Nazi war criminals ever went to prison.

“The Nazi-era lawyers went on to cover up old injustice rather than to uncover it and thereby created new injustice,” said current German Justice Minister Heiko Maas, who presented the report on Monday.

The report noted how the former Nazis' actions while in the justice ministry still have an impact on the present day. Certain ideas from the Nazi era were carried over into post-war times, such as continued discrimination against groups that the Nazis had targeted, like gay and lesbian individuals.

One justice ministry lawyer, for example, had contributed to crafting the Nazis’ racial laws, which forbade marriages and affairs between Jews and non-Jewish Germans. The same lawyer later held a leading position in family law under the post-war justice ministry.

Leutheusser-Schnarrenberger said that part of the reason so many former Nazis had been given high-ranking positions in the justice ministry was that the very first post-war leaders needed experienced lawyers to set up the ministry.

But at the same time this was surprising because both the first justice minister, Thomas Dehler, and his state secretary Walter Strauß had been persecuted by the Nazis: Dehler’s wife was Jewish and Strauß came from a Jewish family.

Leutheusser-Schnarrenberger said that the process of coming to terms with the country’s Nazi past was “the responsibility of the entire ministry”, though above all of the minister and state secretary.

The former justice minister also noted that the situation of the past could be related to current events.

“When you look today at how the use of the concept of ‘national’ is developing among the public, I believe it clearly shows how urgently important it is to show the facts of what happens when people refer to race or bloodlines as special, distinguishing features, marginalizing other people.”

A study last year by the Centre for Contemporary Historical Studies with the blessing of the Interior Ministry found that the post-war Interior Ministry was filled with mostly former Nazis.
It wasn't until the 1960s that people started losing their jobs due to their Nazi pasts, a researcher of the interior ministry report told The Local at the time of its release.
Collective amnesia
Monday's report casts new light on the early post-war era's collective amnesia about Nazi crimes in then West Germany.
Germans were then focused on rebuilding a country in ruins, and many remained in denial about past crimes, dismissing the 1945-49 Nuremberg trials as “victor's justice”.
The western allies occupying the country – the United States, Britain and France – were focused on what they saw as the new Cold War threat of Soviet Russia, which controlled communist East Germany.
As a result of these and other factors, allied and later West German courts only convicted around 6,650 ex-Nazis, a tiny fraction of the party membership.
Few of these served long jail terms because judges required a high burden of proof, including evidence a defendant had acted on their own initiative or with unusual cruelty. Most suspects were regarded as accomplices and thus received lighter sentences.
A fundamental change only came after most war criminals were dead, with the case of Ukrainian-American John Demjanjuk, a former death camp guard who had become an auto plant worker in Ohio.
In 2011 a German court convicted him not for crimes he could be linked to personally, but on the basis that he had served as a cog in the vast Nazi killing machine, at the Sobibor camp in occupied Poland.
A number of trials have followed the landmark ruling, of men aged in their 90s, including the 2015 conviction of Oskar Gröning, dubbed the “Bookkeeper of Auschwitz“.
While some have hailed such trials as finally bringing to justice the last perpetrators of the Holocaust, others have decried them as too little, too late.