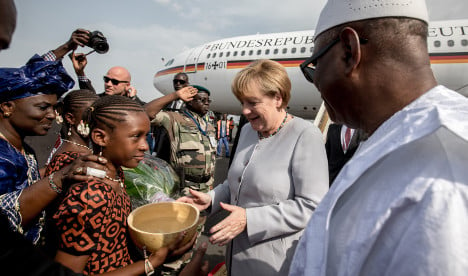 Merkel also underscored the need to “establish coherent cooperation” in development policy and military support in Mali, her first port of call.

“It is important that Africa does not lose its best minds,” she added.

The IMF said that the number of sub-Saharan migrants living in developed countries could increase from about seven million in 2013 to about 34 million by 2050.

Merkel earlier told Die Zeit weekly that bringing more stability to Africa and improving living conditions on the continent would help reduce the numbers of people seeking to leave.

In Mali, Merkel is due to visit German troops taking part in the UN peacekeeping operation MINUSMA and the European Union Training Mission in Mali.

The ongoing international military intervention that began in January 2013 has driven Islamist fighters away from the major urban centres they had briefly controlled, but large tracts of Mali are still not controlled by domestic or foreign troops.

Merkel later heads to Niger and then Ethiopia where she is to visit the African Union headquarters in the capital Addis Ababa.

The Malian president pledged to try and limit the number of migrants leaving for Europe.

“We want our youths to remain here rather than drown in the Mediterranean,” he said, adding that the area had “become an open cemetery.”

Since 2014 more than 10,000 migrants have lost their lives in the Mediterranean, according to UN figures.

The German chancellor has said that she wants the European Union and North African countries to do deals modelled on a controversial agreement with Turkey to curb migrant flows to Europe.

Under the EU-Turkey deal, Ankara agreed to take back Syrians who made it to Greece in return for being allowed to send refugees from its massive camps to the bloc in a more orderly redistribution programme.

The pact also pledges billions of euros in EU aid for Turkey and visa-free European travel for Turkish citizens.