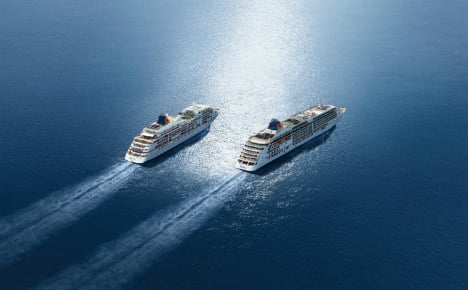 The German-operated MS Europa motored into La Goulette with 350 passengers on board for a one-day stopover.

The tourists, cameras at the ready, were greeted by a band of soldiers playing trumpets and drums, as well as camels and North African dancing, while the local tourist shops garlanded them with jasmine necklaces as they disembarked.

Tunisian authorities, who have ordered high security for the visit, are hoping to lure back the big cruise operators who have abandoned the country for the past year and a half since the gun attack on the capital's Bardo National Museum.

“The arrival of the liner Europa does not in itself signal the resumption of cruise liner activities in Tunisia,” said Malek Ghanemi, head of La Goulette's cruise liner terminal.

“But it's very important because it sends out a positive and reassuring message,” he told AFP.

Gabriella, a tourist from Berlin, was all smiles as she headed off for Tunis medina, or old city, a UNESCO-listed World Heritage Site. “I'm not scared at all,” she said.

Tourism Minister Selma Rekik Elloumi was to attend a special ceremony later Thursday underlining the significance of the ship's stopover for a key sector of the Tunisian economy.

Many of the tourists who died in the March 18th, 2015 attack claimed by the Isis jihadist group that also killed a policeman were on cruise stopovers.

Tunisia's tourism sector has been in crisis ever since the revolution of 2011 which led to the overthrow of longtime dictator Zine El Abidine Ben Ali.

The industry used to contribute around seven percent of GDP and supported 400,000 jobs.

Dozens of hotels were forced to close last winter following the Bardo attack and another in June 2015 around a beach hotel in Sousse that left 38 foreign holidaymakers dead.