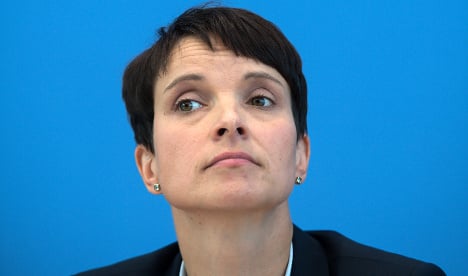 Petry gave a speech in Stuttgart on Monday for German Unity Day in which she predicted a “Darwinistic” conflict between Europe’s residing “transfer payment recipients” and immigrants from the “lumpenproletariat Afro-Arabian world,” the Frankfurter Allgemeine Zeitung (FAZ) reported.

Petry also condemned the notion that Germany is a diverse and multicultural country – something which traditional parties often emphasize – suggesting instead that it should be ethnically homogenous.

“What should someone take from the whole ‘Germany is colourful’ campaign? A compost heap is also colourful,” Petry said in the Baden-Württemberg capital.

The interior minister of Baden-Württemberg, Thomas Strobl, told FAZ that Petry’s statements were “repulsive” and “despicable”.

“The strategy of these people is to make people scared. Therefore we should not even get involved with them,” said Strobl, who is a member of Chancellor Angela Merkel’s conservative CDU party.

“[The AfD] is not the savior but the traitor of the Western world… they live for crisis and have no other goal but to expand this in everyday life.”

“Once more the AfD has shown their hateful face,” Stoch told FAZ. “This blunder reaffirms that the AfD is by no means a bourgeois, but rather deeply inhuman.”

Last month she criticized Merkel for not having children and thus not being able to “see beyond the periphery”.

The AfD emerged in 2013 as a eurosceptic party, but has steadily moved farther to the right, gaining support from anti-immigrant sentiments that have surfaced amid the influx of refugees to the country.

In all five state parliament elections held in Germany this year, the party has gained double digit scores, recording its biggest victory in the eastern state of Saxony-Anhalt at 24 percent in March.

After gaining 14 percent in Berlin’s state election in July, the party’s deputy leader claimed they were on course to become the third largest party in the country in federal elections next year.

SEE ALSO: Is it fair to call the AfD far-right?