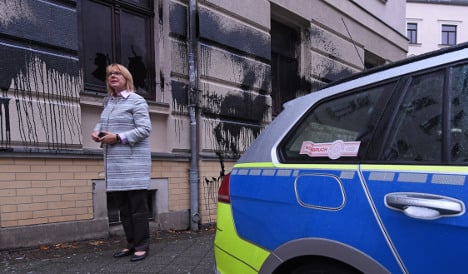 CDU lawmaker Bettina Kudla outside her office in Leipzig, looking at the vandalism. Photo: DPA.

An as yet unknown person spread a tar-like substance across the outer facade of Kudla’s office in Leipzig, smashed in four windows and then vandalized her office late on Monday night, according to police.

Earlier on Monday, officers found evidence of forced entry at the office door, revealing that someone had tried to break in.

As of Tuesday, there was no evidence that could lead to a suspect or to suggest a motive for the attack.

The Bundestag (German parliament) representative faced harsh criticism from within her own party after she tweeted a term originally invented by the Nazis to criticize Merkel’s refugee policies.

“Merkel denies it, [CDU leader Peter] Tauber dreams about it. The Umvolkung of Germany has already begun. There is a need for action!”

The term Umvolkung was first coined by Nazi propagandist and historian Albert Brackmann to mean “ethnic transformation” in describing the “Germanization” of certain people thought to be “German-friendly” in conquered territories.

The term has since been used by members of the far-right scene to describe their fears of immigrant populations taking over the German country and culture as their population grows.

At the end of August, Kudla’s office was attacked and a letter claiming responsibility was posted on the left-wing platform Linksunten.indymedia.

Kudla had also tweeted in August: “On the German parliament building it states ‘to the German people’. There is a difference between citizenship and belonging to a people!”

Spiegel reported that Kudla may be edged out as a candidate for the party in next year’s general election. A CDU source told Spiegel that they would not kick her out of the party before then because she may join the far-right Alternative for Germany (AfD) party.