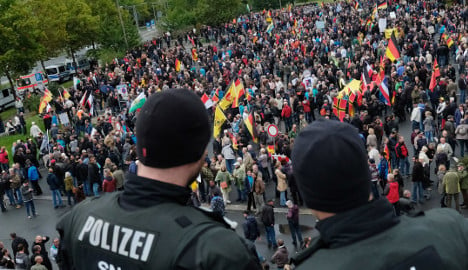 Police at the Pegida march on Monday. Photo: DPA

Before the start of a demonstration by the xenophobic Pegida group on German Unity Day, an officer read out the assembly regulations – something which event organizers usually do. He said the reason for this was a problem with Pegida's loudspeaker, and that he was “happy” to do it.

At the end of the briefing, the police said to the thousands of Pegida supporters: “We wish you a successful day!”, a statement which demonstrators greeted with applause and the chant “One, two, three, thank you police!”

Police later issued a statement on Monday explaining that the officer's words “do not reflect our philosophy and will be subject to an investigation,” adding that the police had a “duty of neutrality”.

“We regard the verbal announcement and the use of the whistle as a form of expression,” the police statement said.

It added that as there was no danger posed or any threat to the security of the event, the police and city authorities decided not to intervene.

The demonstration in the Pegida movement's hometown of Dresden corresponded with Germany's national celebration to mark 26 years since East and West Germany reunified at the end of the Cold War. The Unity Day fest was attended by Chancellor Angela Merkel and President Joachim Gauck.

The Chancellor and President were greeted with jeers and shouts of “get out” by the Pegida demonstrators, among whom were also numerous neo-Nazis, according to DPA.

During the march, the crowd carried banners calling for Chancellor Merkel to resign.

Around 2,600 police officers were deployed at the Dresden Unity Day celebrations, which were attended by around 450,000 people – significantly less than the 750,000 expected by authorities.

In the days leading up to the Unity Day celebrations, the city was put on high alert after a mosque and convention centre were hit by homemade bombs last week in what police called “xenophobic” attacks.

A recent government report outlining progress since reunification warned that growing xenophobia and right-wing extremism in former East German locations like Dresden could threaten the peace.