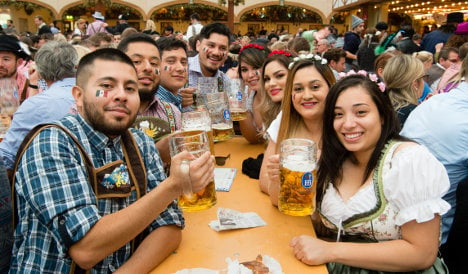 Munich heightened security measures this year amid ongoing terror concerns throughout Europe and in the wake of recent violent attacks in southern Germany. A shooting spree in July in the Bavarian capital left ten people dead. In the same week, a teen in Würzburg attacked train passengers with an axe and a man blew himself up outside a music festival in Ansbach.

Both the Ansbach and Würzburg attackers reportedly had been in contact with members of terror group Isis.

Oktoberfest in Munich was the site of one of the worst terrorist attacks in German post-war history when a right-wing extremist set off a bomb that killed him and 11 others in 1980.

For the first time in the fest’s more than 200-year history, organizers put in place entrance checks for everyone going into the festival grounds.

As the number of visitors dropped this year, so did the overall amount of crime, with a decrease of 15 percent compared to last year.

But there was a higher amount of sexual crimes: 31 were reported to police this year, compared to 21 in 2015.

Organizers said this was due to greater awareness on the part of authorities.

Still, the group “Safer Wiesn for Girls and Women” counted 215 women who came to a security checkpoint for help – up from 197 last year – and 18 of the women had experienced violence.

There was a drop in other kinds of crimes, such as pickpocketing incidents and the number of people hitting one another with the heavy Maß beer jugs.