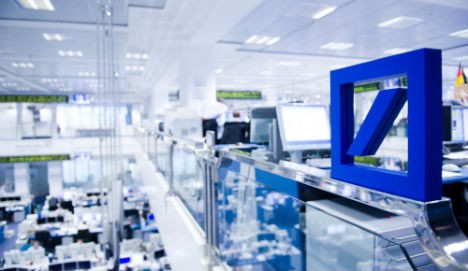 “The report is wrong. The government is not preparing rescue plans. There are no grounds for such speculation,” the ministry said in a statement.

Respected weekly newspaper Die Zeit had earlier said government officials were working on a plan to rescue the bank “if the worst comes to the worst”.

Deutsche Bank on Wednesday also denied rumours it had sought state aid and announced the billion-euro sale of its British insurer Abbey Life, in a bid to reassure investors spooked by a potentially massive US fine.

State aid “is not on the table”, chief executive John Cryan told Germany's biggest-selling newspaper Bild after the lender's share price sank to a historic low this week.

Die Zeit had reported that German and EU officials were working on a rescue plan to be triggered if the bank is hit with an unaffordable $14-billion fine over its role in the US mortgage crisis.

Eager to show investors it was working to clean up its balance sheet, Deutsche on Wednesday said it had agreed to offload its British insurance company Abbey Life to life insurer Phoenix Group for €1.1 billion, which will provide a slight boost to its capital buffer.

The announcement comes after shares in the bank hit a record low on Monday, dropping 7.54 percent to close at €10.55 and ending at the same level on Tuesday.

They rose nearly 2.1 percent in late morning trading on Wednesday to €10.77, while Frankfurt's DAX 30 index was showing a gain of 0.9 percent, as investors apparently welcomed the move to shed assets and Cryan's reassurances.

Deutsche has been dominating business headlines ever since the US Department of Justice (DoJ) made its demand for the eye-watering fine earlier this month.

If Deutsche is unable to negotiate the sum down to less than the $5.5 billion it has set aside for legal costs and fines, it could be forced to raise fresh capital on the markets, diluting the value of its shares.

“We expect the DoJ will treat us just as fairly as the American banks” that have settled for much less in similar cases, Cryan insisted to Bild.

'If worst comes to worst'

The latest scare for investors came at the weekend, when German media reported Deutsche had turned to Berlin for help and been refused.

Cryan insisted to Bild that he had “at no point” asked Chancellor Angela Merkel for a rescue, adding that “I also didn't hint at any such thing”.

But Die Zeit is to report on Thursday that Berlin plans that “if the worst comes to the worst” to sell off parts of Deutsche Bank to other financial institutions, and could “in the most extreme emergency” buy a 25 percent stake in the bank.

Some voices in the government favour involving the European Single Resolution Mechanism, set up in the wake of the financial crisis to prevent taxpayer bailouts of failing banks, the newspaper said.

In that case, creditors and customers would bear a share of the rescue costs – potentially creating fresh chaos on the financial markets.

German officials believe attempting to intercede with the US authorities would have little chance of helping Deutsche and would be “potentially counterproductive”, Die Zeit said in an extract sent out on Wednesday.

Beyond the subprimes case, Deutsche faces further looming problems in the shape of an investigation by New York regulators into alleged money laundering at its Russian branch.

The two cases are among the most pressing of some 8,000 weighing on Deutsche, and CEO Cryan has promised to resolve them by the end of the year.

In the boss's chair at Deutsche Bank for a little over a year, Cryan has launched a massive restructuring of the Frankfurt institution, planning to slash 200 branches in Germany and almost 9,000 jobs worldwide by 2020.

“We have far fewer risks on our books than before and we have a comfortable supply of free liquidity, of cash,” he told Bild.

Shares in the bank have lost more than half of their value since January after the bank booked an almost 7-billion-euro loss in 2015.