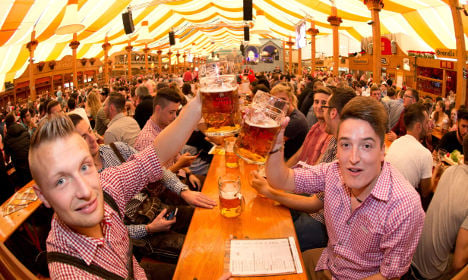 Is this Oktoberfest or is this Stuttgart's Cannstatter Volksfest? Can you tell the difference? Well, it's Stuttgart. Photo: DPA.

Twice as many people attended Stuttgart’s Cannstatter Volksfest on its opening weekend than within the first three days of Munich’s famous Wiesn, also known as Oktoberfest.

Stuttgart saw about one million eager beer-drinkers flood its Wasen festival grounds during its first weekend, which started September 23rd.

“It was an opening better than we could have hoped for,” said event organizer Andreas Kroll.

In comparison, Munich’s Oktoberfest recorded a drop in visitors during its first weekend starting September 17th, with just half a million people flocking to its famed beer tents.

The low numbers in Munich were blamed on security fears as well as the poor weather that weekend.

Stuttgart on the other hand enjoyed bright sunshine and warm temperatures for its first festival weekend.

Munich’s Oktoberfest also heightened security measures this year given ongoing terror concerns throughout Europe as well as recent violent attacks in southern Germany. A shooting spree in July in the Bavarian capital left ten people dead. Within that same week, a teen in Würzburg attacked train passengers with an axe and a man blew himself up outside a music festival in Ansbach.

Both the Ansbach and Würzburg attackers reportedly had been in contact with members of terror group Isis.

Oktoberfest in Munich was the site of one of the worst terrorist attacks in German post-war history when a right-wing extremist set off a bomb that killed himself and 11 others in 1980.

While Oktoberfest will come to an end on Monday, Stuttgart’s Cannstatter Volksfest is set to run until October 9th.

Both fests involve large quantities of the golden brew, carnival rides, and lots of singing while standing atop beer hall benches.

The Cannstatter Volksfest is Germany’s second largest folk festival and this year expects up to four million visitors by the end, while Munich's booze-athon usually pulls in about six million visitors each year.