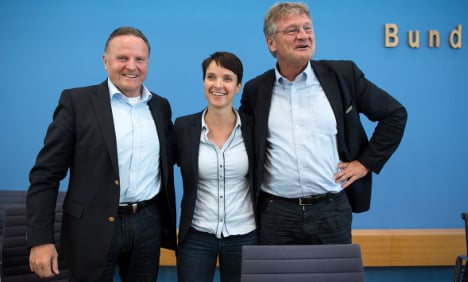 Since the Alternative for Germany (AfD) started shifting their rhetoric and platforms more and more to the right of the political spectrum, we’ve had readers ask us again and again whether it's fair to call the AfD far right.

So we decided to look into the term and why it befits this upstart party.

The AfD was founded in 2013 by economist Bernd Lucke, a former professor of macroeconomics at the University of Hamburg, along with lawyer and journalist Alexander Gauland and journalist Konrad Adam.

It’s main focus was opposing the European single currency and bailouts to poorer EU countries during the financial crisis.

In the 2013 national elections, it just missed the 5 percent mark needed to make it into the German parliament (Bundestag).

But last year, founder Bernd Lucke was ousted from his leadership position and he subsequently left the party, later calling the AfD “inhuman, cruel and unbearable”.

Under Frauke Petry, the new leader of the AfD, focus has shifted more towards refugees in Germany, with the party condemning the country’s asylum and immigration policies. It’s picked up success from those dissatisfied with Chancellor Angela Merkel’s more liberal refugee policies.

What does far-right mean?

Since last summer when Lucke was given the boot and the party decided to focus on refugees, the AfD has managed to win seats in the parliaments of ten states, out of a total 16.

Amid these successes and its anti-immigrant rhetoric, the party has also picked up a new descriptor: far-right. But does the party really fall under this term?

“Yes, I think the AfD is part of the far-right,” Cas Mudde, associate professor at the University of Georgia, and researcher at Oslo University’s Centre for Research on Extremism, told us.

“What's so wrong about being German?”

This term refers to favouring a nation’s established inhabitants over immigrants. And the AfD’s political manifesto is certainly full of nativist statements.

“We are open to the world, but we want to be and stay German,” the party writes in the preamble to its political programme for this year.

“We want to permanently maintain human dignity, families with children, our Western Christian culture, our language and traditions in a peaceful, democratic and sovereign nation state for the German people.”

The programme also has a section entitled “more children instead of massive immigration”, which calls for a “higher birth rate within the native population”.

Members of the party have also reiterated this preference for so-called “native” Germans, like when Gauland said that Germans would not want to have national football star Jerome Boateng – who was born in Berlin and whose father is Ghanaian – as a neighbour.

Gauland also said the national team was “no longer… German in the classical sense”.

In an article for Hope not Hate magazine, Mudde explained that authoritarianism within the far-right “refers to the belief in a strictly ordered society, in which infringements of authority are to be punished severely”.

“This translates into strict law and order policies, which call for more police with greater competencies and less political involvement in the judiciary. Often crime and immigration are directly connected; such as, for example… ‘More safety, less immigration’.”

The AfD has indeed called for more police and security, especially when it comes to immigration.

“The Alternative for Germany considers Europe’s barely protected external borders to be inadequate and calls for the establishment of comprehensive German border protection under the oversight of the federal police,” the party states.

To secure Germany’s borders, the country should “follow the Austrian example and could use members of the German military, as well as possibly build protective fences or similar barriers.”

The party also goes on to explain the link between immigration and crime.

“Millions of people from other cultural backgrounds, who don’t have the skills needed for integration, are enticed to come to Germany on false promises. Disappointed hopes of prosperity carry the risk that many will turn to crime,” the party writes, adding that because of a lack of border controls and mass immigration, “crime increases”.

“Established parties are responsible for the people's disenchantment with politics – AfD brings fresh air to the political landscape!”

Populism is an ideology “that considers society to be ultimately separated into two homogeneous and antagonistic groups, the pure people and the corrupt elite,” Mudde writes.

“Populist radical right politicians claim to be vox populi (the voice of the people) and accuse the established parties of being in cahoots with each other.”

The AfD often positions itself against the country’s traditional parties, especially Merkel’s CDU.

While also criticizing Merkel for not having children, Petry said this month that “it’s on us to take the CDU’s place as a people’s party”.

In their programme, the AfD states that Germany has a “class of career politicians, who impose their own top interests of their power, their status and material well-being.”

“Only the citizens of the Federal Republic of Germany can end these illegitimate conditions.”

University of Rostock political scientist Christian Nestler told The Local that the AfD’s populism is also built upon an idea of national identity.

“The party itself is populist, emphasizing the German nation and identity,” he said.

Certain members of the AfD appear to be more extreme than others.

Most recently, it was revealed that a newly elected AfD Berlin politician had not so long ago been a member of a right-wing extremist group that is under monitoring by German intelligence. He also posted various messages on Facebook glorifying Nazi soldiers and justifying a Nazi massacre of hundreds of civilians in Italy.

The politician, Kay Nerstheimer, was dropped from AfD’s Berlin parliamentary group, but remains within the party.

Around the same time, the lead candidate for the AfD in Saarland was found to be selling Nazi paraphernalia, including medals with swastikas on them.

Last month, photographs emerged of a local AfD politician in Leipzig's campaign car which had neo-Nazi symbols on its license plate, which the local party leader called a “mistake” and said the AfD wanted “distance” themselves “from these kinds of right-wing scene codes”.

While party leaders like Petry have been criticized for their own extreme statements – like suggesting that border police threaten to shoot at migrants entering the country “if need be” – they have also tried to draw a distinction between themselves and the extremists they attract.

So should the AfD be called far-right?

For Mudde, the answer is a clear “yes”, as he explains that the term includes both the extreme right and the radical right.

Nestler from the University of Rostock had a slightly different take. He explained that far-right is too general a term and he would classify the AfD as right-wing populists, adding that members of the party were indeed right-wing extremists.

“The AfD has people who are right-wing extremists, or who position themselves that way rhetorically.”