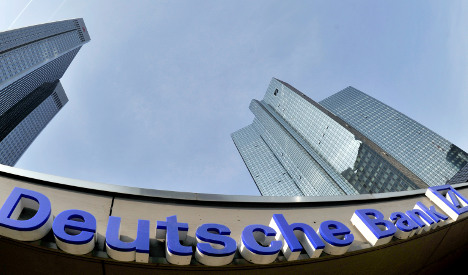 Deutsche Bank's shares reached their lowest level in 24 years on Monday morning. The shock sell-off saw shares plunge by 7.5 percent to end the day at €10.55 ($11.9), dragging down Frankfurt's DAX 30 which closed 2.2 percent lower.

“Given the state of the news, people are selling almost in a panic,” said analyst Michael Seufert of NordLB bank.

Investors were blindsided by news earlier this month that US regulators were seeking a $14-billion fine from Deutsche Bank over its actions leading up to the subprime mortgage crisis in 2008.

German news weekly Focus at the weekend reported that Chancellor Angela Merkel had ruled out any chance of offering state aid or interceding with the US authorities.

Analysts offered some crumbs of comfort for Deutsche watchers, with Seufert noting “there's no reason at the moment why the bank would have to ask the government for help”.

Merkel spokesman Steffen Seibert meanwhile said there were “no grounds” for reports that Deutsche might receive state funding.

But the government would be unlikely to allow Deutsche to fail in the event of a true crisis, Andreas Utermann, chief investment officer at Allianz Global Investors, told Bloomberg Television on Monday.

With around $2 trillion of assets on its balance sheet, Deutsche Bank is “too important for the German economy” for the government to allow it to fail, Utermann said.

In the near term, investors fear that even if Deutsche negotiates a much lower deal with the US Department of Justice, the looming fine will still exceed the $5.5 billion the bank has set aside to cover its roughly 8,000 open legal cases.

Even once a deal has been reached with the DoJ, Deutsche is still under investigation by the New York Department of Financial Services over alleged money laundering in the bank's Russian arm.

Deutsche Bank stock has lost half of its value on the Frankfurt exchange since January, after the lender booked an almost €7 billion loss in 2015.