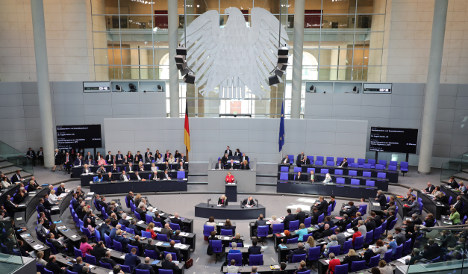 Lawmakers in the Bundestag (German parliament) unanimously approved the accord, which will on Friday go before the upper house Bundesrat for a widely expected final green light.

Germany's commitment brings the deal a step closer to reality after a string of countries ratified the climate rescue pact during the United Nations General Assembly in New York this week.

The accord requires all countries to devise plans to achieve the goal of keeping the rise of temperatures within 2C (3.6F) above pre-industrial levels.

For it to enter into force, it needs to be ratified by 55 nations accounting for at least 55 percent of the planet's greenhouse gas emissions responsible for climate change.

Not including Germany, the 60 countries that have formally signed up so far represent some 48 percent of global emissions.

UN chief Ban Ki-moon has said he was  confident the accord would come into legal force by the end of the year.

China and the United States, the two largest emitters, gave a major boost to the accord when they signed on during a summit earlier this month between Presidents Xi Jinping and Barack Obama.

German Environment Minister Barbara Hendricks described the Paris agreement as “a great sign of hope” in the fight against global warming.