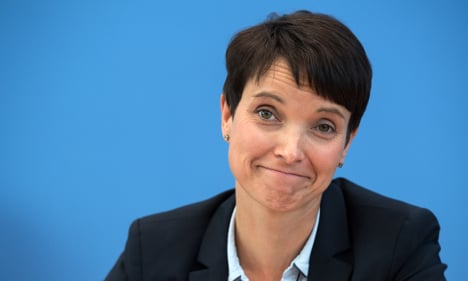 Public broadcaster ARD’s regular DeutschlandTrend survey with research group Infratest dimap showed on Friday that 16 percent of respondents said they would vote for the AfD in a national election – a 2 percent increase from the last poll on September 1st.

The AfD this week has been celebrating its election success in Berlin last Sunday, when it won about 14 percent of the vote, meaning it will have representation in ten of Germany’s 16 state parliaments.

But the party has also this week been dealing with revelations that one of their newly elected Berlin politicians had been a member of the right-wing extremist German Defence League, and had also posted messages on Facebook that glorified the Nazis and justified their killing of civilians.

The Berlin faction of the AfD has since dropped the politician, Kay Nerstheimer, from its parliamentary group, though he will still keep his seat.

The lead AfD candidate in the western state of Saarland, Rudolf Müller, has also reportedly been selling Nazi swastika medals and other items. In Germany it’s illegal to trade in Nazi paraphernalia.

In the ARD poll, most of the more traditional parties remained about the same in their level of support, with the conservative Union of Angela Merkel’s Christian Democrats (CDU) and their sister party the Christian Social Union (CSU) together reaching 32 percent support in the poll. This was a drop of just 1 percentage point since the last poll.

The Union’s coalition partner in the national government, the Social Democrats (SPD) came in second at 22 percent of the vote, also seeing a loss of 1 percentage point.

The main opposition party, Die Linke (Left Party) held 8 percent support, down from 9 percent previously, but the Green party made a small gain of one percentage point to reach 12 percent.

The Free Democratic Party (FDP) got a slight bump up to 6 percent from 5 percent. This could be a promising sign for the liberal party, which had long been a junior coalition partner in the German parliament before it failed to reach the 5 percent benchmark in the 2013 election and therefore lost its seats.