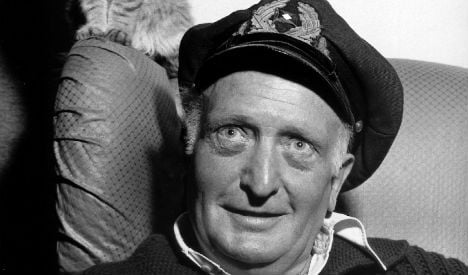 “He wasn’t a pop star, but a darling of the public,” a Hamburg politician once said of Hans Albers.

55 years after his death, bars such as “Albers Eck”, “La Paloma” and a sculpture on Hans-Albers-plaza in the port city commemorate Albers, who became famous as a stage and movie actor and was widely loved for his heart-wrenching songs, such as “Good bye, Johnny” and “La Paloma”.

From butcher's son to crooning star

Born to the butcher Philipp Albers and his wife Johanna in the Hamburg district of St. Georg in 1891, young Hans already loved theatre and spent his pocket-money on going to plays.

To please his father he trained to become a salesman and worked at a silk factory, all the while taking acting classes in secret and going to Berlin to try his luck on stage after the First World War.

But his breakthrough only came at the age of 37. One night, an actor fell out before a performance of the play “Die Verbecher” (the criminals) at the renowned Deutsches Theater in Berlin.

Albers jumped in and won over the masses.

“I had to work hard for 20 years until I finally got my chance,” he once commented in an interview.

“Liliom” by Franz Molnar went on to become his most famous on stage production and its tune “Komm auf die Schaukel, Luise” (Join me on the swing, Luise) was a hit.

After starring in over 100 silent movies, Albers starred in the first ever German sound movie “Die Nacht gehört uns” (The night belongs to us) in 1929, which was closely followed by a role alongside world-famous German actress Marlene Dietrich for the movie “Der blaue Engel” (The blue angel).

Many of Alber's movies revolved around the longing for the sea or the romance of the harbour, and he often played the roles of ship captains and dockworkers.

His popularity also brought fame to Hamburg, specifically to the district of St. Pauli, which is renowned as the home of one of Germany's biggest party streets – “die Reeperbahn”.

Films such as “Große Freiheit Nr. 7” (Great freedom Nr. 7) and “Auf der Reeperbahn nachts um halb Eins” (On the Reeperbahn at half past 12) created a debauched but romantic image of the district, which spread around the world.

And it was no secret that Albers himself had a penchant for women and alcohol.

“[The movie's representation of St. Pauli] had nothing to do with reality, but it supported the positive image of Hamburg and its harbour,” commented Ortwin Pelc from the Hamburg Historical Museum.

“A heart of gold”

During the Second World War, Albers never had any affiliation to the Nazis and was never seen with high-ranking Nazi officials.

When the Nazis demanded he separate from his Jewish girlfriend and actress Hansi Burg, he officially complied but continued living with her close to Lake Starnberg, south of Munich, and later helped her escape to England.

During the war he was appreciated as a crowd puller and was in a position to demand high wages, but after the fighting ended he never quite managed to match his earlier success.

Even though he spent the last years of his life on the shores of Lake Starnberg, it was important to him to be buried in Hamburg, the city of his birth.

When he died in 1960, tens of thousands came to his burial to say their goodbyes and listen to the words of movie director Helmut Käutner:e

”You were a true king. Your humour was your sceptre and your heart of gold was your crown. Good bye, Johnny. Have a good journey.”