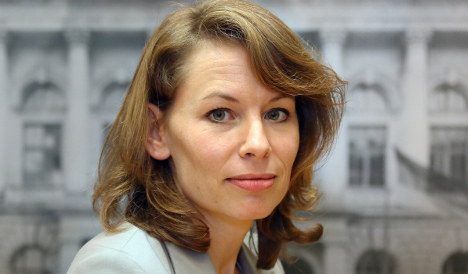 If the Social Democratic Party (SPD) plan to show this kind of generosity to the people who re-elected them in Berlin on Sunday, perhaps the good times lie ahead for the happy-go-lucky German capital.

The Berliner Morgenpost reported on Tuesday that the former head of press operations for the Berlin government had been placed on early retirement – to the tune of €6,385 per month and at the age of 37.

Because she held a position as state secretary, Augenstein is entitled to be paid her full salary for the next three months, which the Berlin interior department told Spiegel Online would be “around €8,906” per month.

On top of that, Augenstein is under law supposed to receive 71.75 percent of her full pay check – about €6,385 – for the same amount of time that she was in her position.

Because she started in December 2014, this means she could be swimming in the generous retirement payments for the next 21 months.

Still, the Morgenpost reported that the total amount she receives will take into account any other income that she receives during this time.

The reaction to Augenstein's reported retirement plan was swift:

Many, including TV presenter Christoph Süß, joked on Twitter that perhaps the SPD was considering a new national pension policy, using the Berlin spokeswoman as a model.

A meme was shared with Augenstein's face, stating: “The 'Berlin Model': Could retirement come at 37?”

“I would gladly become her successor,” wrote Gert Postel, famed for successfully applying to become a doctor without any medical training, and later becoming a figure in the anti-psychiatry movement in Germany. “I have the usual qualifications.”

Why exactly Augenstein was let go is not clear. Müller said only that he assumed the 37-year-old “wanted to do something” else.

He rejected rumours that it had been due to a personal disagreement or a difference in opinion about campaign strategies, saying that her leaving the position “had been decided between Ms. Augenstein and myself months ago”, in around January or February.

Speculation about a falling out between the politician and his spokeswoman had already begun when reporters noticed that Augenstein had gone missing shortly before election day. The city office told Tagesspiegel on August 26th that the theories about Augenstein leaving were “absurd speculation” and that she was on a ten-day holiday, using up unused vacation days.

When pressed about Augenstein’s unusual vacation time right before the election, Müller told reporters that she had had personal reasons. He added that she was not needed at that point in the campaign because media communication about him as a candidate had gone through his party instead.