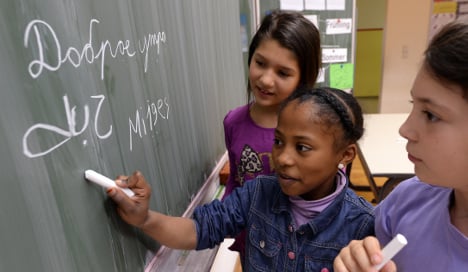 Children from Albania, Libya and Ukraine at a school in Chemnitz. Photo: DPA.

The Federal Statistical Office (Destatis) reported on Friday that 17.1 million people out of a population of 81.4 million last year had some kind of immigration background.

This included people who had immigrated to Germany themselves, people with at least one parent who wasn’t a German national, and ethnic Germans or their children who had re-settled in Germany.

Destatis said that this was a record level for Germany with an increase of 4.4 percent over 2014.

The microcensus did not include most of the hundreds of thousands of refugees who came to Germany last year, Destatis noted.

Most people in this group had roots in Turkey, Poland and Russia.

A total of 6.3 million people had come to Germany, or were descendants of someone who had come through a guest worker programme from Turkey, Italy or Greece.

The microcensus also showed that one in three kids under the age of 18 are immigrants or came from immigrant families. And for children under five years old, this figure was 36 percent.

Destatis also noted that people coming from immigrant families tend to have lower levels of education than others. For people between the ages of 25 and 35, those with an immigration background more often had either no equivalent of a high school diploma, or only had a vocational high school degree.

They were also three times more likely to have no professional qualification.

On the other hand, both immigrants and non-immigrants had almost the same rate of obtaining academic degrees.

There were also disparities when it came to the job market. Those with an immigration background were less often employed and almost twice as often in manual labour.

Among the various countries of origin, there were also different trends. Of people between the ages of 25 and 35 with Chinese heritage, for example, 88 percent completed their Abitur, or final exams to go on to university. Just 16 percent of those with Turkish roots had done the same.

In the job market, young professionals with French heritage earned on average €2,622 per month, compared to €1,352 for people from Bulgaria.

Ulrich Kober from the Bertelsmann Foundation said that despite the differences, and concerns among native Germans about the future of the country, people with immigration backgrounds feel they fit in.

“The majority of the immigration population feel at home in Germany and identify with the country,” Kober said.

“Integration does not happen on its own, you have to invest in it.”