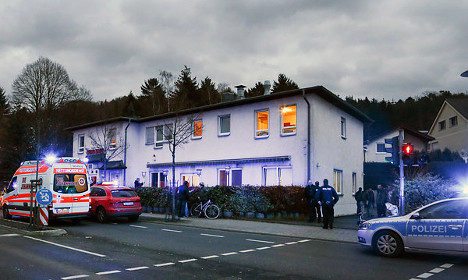 Emergency services the scene in Lohmar, near Bonn. Photo: DPA

The 36-year-old refugee is suspected of attempted murder after hurling the children out the window of the asylum centre where the family lived.

Prosecutors say the suspect has admitted to throwing his children out the window of the asylum accommodation, formerly a Chinese restaurant, in Lohmar.

According to the indictment, the crime stemmed from the 36-year-old’s frustration with his wife, who “in Germany no longer wished to accept the roles they had at home, and did not want to put up with everything he wanted any more.”

He rejected his wife’s desire for greater freedom and in January was issued with a ten-day barring order after attacking her. A few days later, she let him move back in.

But on February 1st, the same day he targeted his children, the couple quarrelled again and the 36-year-old struck his wife in the face with a saucepan, an attack classified in the indictment as bodily harm.

The defendant left Syria alone in 2014, travelling through Turkey, Bulgaria and France before arriving last year in Germany, where his family joined him.

His trial begins on Tuesday.

Crimes committed by refugees have remained a political hot potato in Germany ever since a spate of sex attacks in Cologne on New Year’s Eve made international headlines.

Figures show that the number of crimes committed by asylum seekers has plummeted in recent months, but the anti-immigrant AfD is continuing to make major gains across Germany amid worries over a surge in refugee arrivals last year.