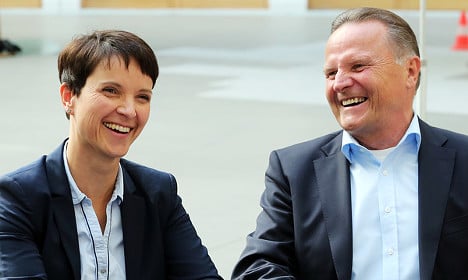 The Alternative for Germany scored 14.2 percent of the vote in Sunday’s elections in the capital, putting the party just three point behind Angela Merkel’s CDU.

Now, for the first time, the party looks set to exert political influence in the German capital. The party’s share of the vote means it is entitled, in theory at least, to have councillors in seven of Berlin’s 12 boroughs.

In practice, the political establishment could try to lock the upstart party out, since councillors are formally elected by the 12 district councils.

Before the election, councils had considered blocking AfD candidates from voting, but this looked a less likely prospect on Monday after the anti-immigration party had scored higher than more established parties in some boroughs.

In Neukölln, the Social Democratic Party (SPD) mayor Franziska Giffey suggested the AfD would get its chance.

“Now they have to show if they can do the job,” she told broadcaster RBB.

Until now the party has had a governing mandate in just one town hall nationwide: the small town of Reuth in Saxony, where the mayor is an AfD politician – and that only after the mayor joined the party after the election.

In some of Berlin’s poorer boroughs the AfD’s success fell in line with predictions, notably in the eastern districts of Lichtenberg, Marzahn-Hellersdorf and Treptow-Köpenick, while the party also performed well in Pankow.

But the party also exceeded expectations in the western boroughs of Spandau, Reinickendorf and the multi-cultural Neukölln.

“Berlin will be a billboard for the AfD’s ability to govern and perform,” said the party's Berlin leader Georg Pazderski before the election.

But it was uncertain which candidates the party would pick to fill any vacancies, since so few had any political or administrative experience.

Pazderski said the AfD would address this by casting its net outside the city to find the right people if necessary.

“Because the policy-makers need to master their area of expertise,” he explained.

With this in mind he was unlikely to opt for the party colleague in Neukölln who told the Berliner Zeitung before the election: “I have absolutely no idea what a councillor does”.

Each district mayor in Berlin works with four councillors, who are responsible for things like planning permission, school buildings and local parks – but they also control budgets for grants given to clubs and political groups, which could see the party strangle some of the resources currently used to help refugees.

“In 2017 we will witness Angela Merkel fighting for her political life and the AfD will become the third largest political power in Germany – at the least,” she wrote on Facebook.