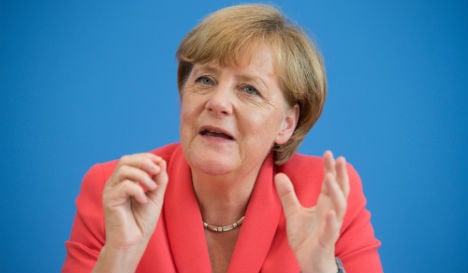 Angela Merkel. Photo: Bernd Von Jutrczenka/dpa
Merkel first used the much-repeated phrase at the end of August last year to lay out her welcoming stance on migrants, after saying Germany could cope with an influx of around one million refugees, many fleeing the war in Syria.
But as the worst migrant crisis in Europe since World War II has continued Merkel has come under pressure and her approval ratings have plunged.
Last week she called on her ruling coalition to resist pressure to change its refugee policy after a stinging defeat in the northeastern state of Mecklenburg-Western Pomerania to the upstart anti-migrant AfD in regional elections.
But in an interview published Saturday with the Wirtschaftswoche financial weekly Merkel said her “we can do it” exhortation no longer resonated.
“I sometimes think this phrase was a little overstated, that too much store was set by it — to the extent that I'd prefer not to repeat it,” Merkel said, explaining she had sought to come up with a “motivating” formula.
But over time, “it's become a simple slogan, an almost meaningless formula,” she added.
“Some feel provoked (by the expression), which of course was not the idea,” she said. It was meant to show that Germany had the strength of purpose to cope with migrant integration.
Merkel said she was well aware that “we Germans together have much to carry on our shoulders”, but should not seek to highlight them using glib expressions such as an “overly repeated” phrase.
She has regularly urged politicians not to deploy a populist approach but retain a sense of moderation in a bid to retain political support.
With the rise of the AfD, Merkel has described the far-right party as offering “no solutions to problems and is built mainly around protest, often with hate”.
But her welcoming stance on migrants has caused tension in her coalition notably with Bavarian sister party the Christian Social Union. The AfD is hoping to garner around a 15 percent share of votes in Sunday's
Berlin regional elections and again issue a stark challenge to Merkel's Christian Democrats just as it did two weeks ago in Mecklenburg-Western Pomerania.
Merkel, despite having dominated European politics for more than a decade, will in the coming months have to decide if she is to stand for a fourth term as chancellor in general elections due in autumn of next year.