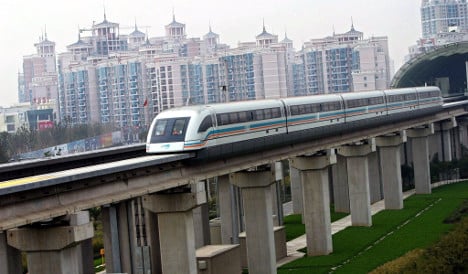 Berlin-based newspaper Tagesspiegel reported on Friday that international construction company Max Bögl had suggested the rapid transit system, like the one they helped work on for Shanghai’s international airport, which was the first of its kind.

Maglev trains run along their tracks using magnets, creating both lift and propulsion to reduce friction and allow for extremely fast speeds.

“I think it’s good to consider alternatives and other options to improve the transportation connections of the new airport.”

The maglev system is now on a list of possible options for the airport’s transit connections. This aspect of the project is particularly important because of the increased passenger traffic that the new airport would bring in, Tagesspiegel reports.

But before the city can hope to see a train system of the future, it must first sort out the long-time mess that is the BER airport. The Berlin-Brandenburg airport was originally supposed to open in 2011, but this has been repeatedly postponed due to planning failures and corruption accusations.

Last month, an airport project employee admitted to taking €150,000 in a bribe from contractor Imtech, which had worked on the fire safety system – the rebuilding of which is a major cause of the airport’s delays. The company filed for bankruptcy in 2015.

Hopes that the airport would be finished by next year were also dashed recently when in May officials said that 2017 would no longer be feasible. At the time, Tagesspiegel reported that concerns about the airport’s fire safety system were among the reasons for the changed plans.

Max Bögl company spokesman Jürgen Kotzbauer told Tagesspiegel that Berlin mayor Michael Müller was “at the moment a bit sceptical about the use of magnetic levitation technology to connect the airport to public transit”.

An alternative could be to extend the U7 subway line to the airport, which would cost about €300 million for one kilometre of tracks.

In comparison, the costs of a maglev line would be cheaper by about 50 percent, according to Tagesspiegel. Construction of it could also only take two to three years.

Other maglev projects in Germany have fallen through, such as one to Munich’s airport. This plan, launched in 2007, had to be cancelled due to the soaring costs.

The mayor of Schönefeld, the Brandenburg district where the airport is being built, was nonetheless positive about the proposal.

“Whether it’s an extenstion of the U7 line, or a maglev train, both are reasonable suggestions,” said Udo Haase of Schönefeld. “I think the maglev idea is great.”