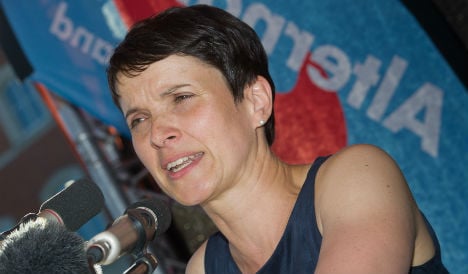 “I have four children, Merkel has none,” said Petry in an interview with stern.

“Kids help you see beyond your own periphery. And that’s what Merkel doesn’t do.”

Merkel doesn't have her own children, but is currently married to her second husband, chemistry professor Joachim Sauer, who brought his own two children into the marriage.

“In the mid-term, it's on us to take the CDU's place as a people's party,” Petry said.

It’s not the first time the incumbent chancellor, who has earned the nickname “Mutti Merkel” (Mummy Merkel) over the years, has been criticized for her lack of offspring.

“Mrs. Merkel’s biography is not reflective of the experiences of most women,” Doris Schröder-Kopf, the wife of Merkel’s former political rival Gerhard Schröder, told Die Zeit during election campaigning in 2005, when Merkel pushed the centre-left Schröder out of power to become the first female chancellor.

The chancellor herself has commented on the fact that she never had children.

“It just didn’t happen. My life took a different path,” she commented on the issue a few years ago.

But Merkel earned harsh criticism for her relationship to children again when she brought a 14-year-old Palestinian refugee girl Reem Sahwil to tears last year during ARD’s Morgenmagazin, telling her that Germany could not take in every refugee.

Her reaction was condemned as cold-hearted on social media, with the topic trending under #merkelstreichelt (Merkel strokes), a reference to the chancellor’s somewhat clumsy attempt at calming the girl down by stroking her.

However, the 14-year-old later said that she was fine with Merkel giving her opinion.

Petry’s critique follows weeks of competition between the established Christian Democratic Union (CDU) and the xenophobic AfD, which was founded in 2013.

After the AfD took 21 percent over the CDU's 19 percent in its first bid for seats in the regional parliament of Mecklenburg-Western Pomerania, AfD lead candidate Leif-Erik Holm commented that “… maybe that is the beginning of the end of Merkel's time as chancellor.”

The AfD are currently polling at around 15 percent in Berlin, four points behind the CDU.