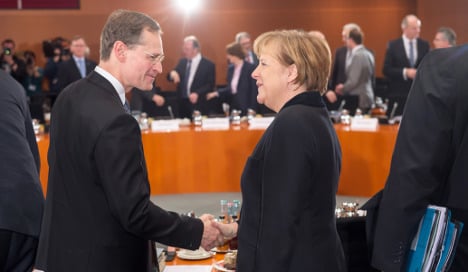 In an interview with Berlin-based newspaper Tagesspiegel published on Monday evening, Merkel criticized the mayor of Berlin, Michael Müller, for not taking more responsibility in handling the refugee crisis in the city.

“The issue of integration is an important one in Berlin. The CDU takes that seriously. The ruling SPD mayor declared himself, however, not responsible and pushes the responsibility away from himself,” Merkel told the newspaper.

“But from my own experience, I know that leaders always carry the responsibility and will be held responsible in the elections.”

The Chancellor, though, defended her own actions in handling the refugee crisis, saying that she was at peace with herself.

“I am committed to serving the interests of Germany and I am working with all my strength to do this.

“In the history of the Federal Republic of Germany, there have always been intense political debates that have been controversial even within families. It’s about our self-image, our values and the question of how we should present ourselves internationally,” Merkel said.

“Whoever has to make the political decisions that point the way forward must do this – even if it is polarizing – and must simultaneously always give the reasons for the decisions in order to win support,” Merkel continued.

“In any case, I see this as my duty. Most of the decisions on the refugee policy were otherwise supported by the overwhelming majority of the Bundestag [German parliament], the states and the communities as a national effort.”

She did say, though, that as Chancellor, she must take on responsibility for the consequences of the refugee crisis, just as well as any successes achieved.

Berlin will hold its election on Sunday September 18th, with Müller’s SPD party hoping to remain the majority party after 15 years in power.

The city government has been criticized for not fully meeting the needs of refugees, with reports that asylum seekers have had to queue outside registration centres in temperatures as high as 40C and as low as -8C.

Earlier this year, a city refugee official was arrested for accepting bribes in exchange for awarding contracts for services to refugees.

The head of Berlin’s asylum seeker registration office, Lageso, stepped down in December amid growing criticism of the chaos in processing refugees.