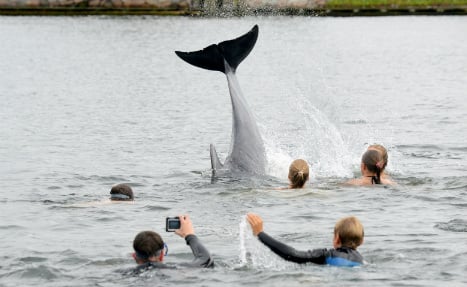 The dolphin swims with children in Kiel. Photo: DPA

The dolphin appeared in the Baltic Sea harbour at some point late last week and has quickly become a tourist attraction, reports the Kieler Nachrichten.

The whole town is now in a state of fever, with everyone hoping to catch sight of – or even go for a swim with – the aquatic mammal, the local news site reports.

The dolphin has also quickly made friends with local children and reportedly lets them hug it or hold onto its flippers as it swims along.

“It’s not normal that a dolphin trusts humans so much,” marine scientist Dr. Boris Culik told the Kieler Nachrichten. “But one does find dolphins who seek out human company. Perhaps he is just lonely.”

Its favourite activity seems to be to pass through the sluices which connect the North Sea Canal to the open sea and lucky passengers on the local ferry have been delighted to see him swim along beside them.

“The dolphin chirpily passes through the sluices. The traffic on the canal doesn’t seem to bother him,” Matthias Visser from the sea traffic office told DPA news agency. But Kiel’s water police are warning members of the public not to swim in the area close to the sluices, which is banned due to the disturbance it can cause for shipping.

They also asked for people to be considerate towards the dolphin which can feel intimidated if too many people approach it.