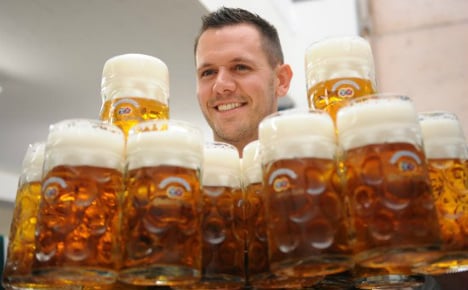 If you like being held in the sweaty embrace of a stranger surrounded by boys in lederhosen and girls in dirndls, then Oktoberfest is for you.

Perhaps it's the alcohol, perhaps it's the amount of tourists, or just the fact that you have no choice but to sit and stand close to strangers, but Oktoberfest is a great place to meet new people from every corner of the world. Every year Oktoberfest throws up something new. And this year the famous Hacker Tent has undergone a redesign. But not to worry traditionalists! The iconic “Sky of Bavaria” ceiling decoration is still there, but this time with slatted wood to help refresh the sweaty Wiesn air.

And outside it has a new covered balcony so that over 500 guests can guzzle on their brews outside, come rain or shine.

The festival is a dream for meat-eaters. At one tent, the Ochsenbraterei, huge oxen are roasted each day for hungry visitors. There is also one area where hundreds of ducks are roasted. This is the food and drink that helps put the Volk into Volksfest. If you're not in lederhosen or a dirndl, you're going to feel left out. Oktoberfest is a great chance to wear fine hats, ribbons, waistcoats and jackets in which you would normally feel a bit silly.

This is probably what you've come for, and the world's biggest beer festival doesn't disappoint. Munich's famous breweries all have huge tents on the field, serving their special Oktoberfest brew and visitors are encouraged to drink up through regular renditions of drinking songs.

And five reasons to stay away… 2) There is also trouble

Put thousands of drunk people together and trouble will ensue. Visitors to Oktoberfest will see far fewer fights than the equivalent of such eventsmunich in England, for example, but every year there are reports of sexual assaults and dozens of thefts. It is also a particular draw for bag snatchers.

Everything is more expensive in Munich for the 16 days of Oktoberbest. The annual price rise for a litre of beer (known as a Maß) continues. Eyebrows were raised last year when a beer edged over the €10 mark for the first time and this year it is creeping towards €11. A matter of taste of course, but would you listen to DJ Ötzi in your spare time? If you don't like cheesy music or German Oom-pah bands, stay well clear of Munich. Each beer tent has its own bands and music, but they are generally playing the same stirring drinking songs. The night normally finishes with Angels by Robbie Williams. Nightmarish.

This can be avoided if you pick your time carefully, but for those who can only attend at weekends, there is little choice but to start drinking at 9am or queue for hours. The middle weekend (this year September 24th and 25th), known as Italian Weekend due to the influx of Italian tourists, is particularly busy.