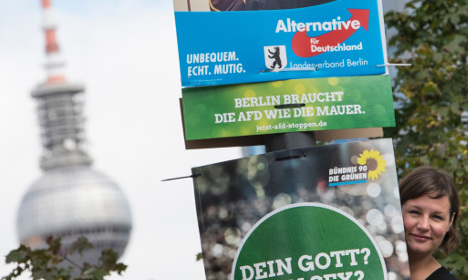 A campaign poster for the AfD posted above a sign protesting the AfD, reading "Berlin needs the AfD like it needs the wall". Photo: DPA.

A poll by broadcaster ARD and research group Infratest dimap released on Thursday evening showed that the far-right Alternative for Germany (AfD) could gain 15 percent of the vote in the upcoming Berlin state parliament elections set for September 18th.

The AfD's support in Berlin has been hovering around 15 percent in the Infratest dimap polls since April.

The current reigning Social Democrats (SPD) got just 21 percent in the poll, followed by Chancellor Angela Merkel’s conservative CDU (Christian Democratic Union) on 19 percent. The pro-environmental Greens came in as the third most popular party with 16 percent support.

The AfD was founded in 2013 and therefore was not in the last Berlin elections in 2011.

The election in the northeastern state of Mecklenburg-Western Pomerania shook Merkel’s CDU after her party fell to third place behind the AfD in second.

The results have stirred Merkel and her party allies to rethink their strategy with voters, especially with the national elections a year away. The Chancellor herself said that she had to take responsibility for the declining popularity of the CDU amid the AfD’s rise, and stressed that the party must focus on “how we can win back trust and move forward”.

But the Berlin poll results are perhaps most concerning for the SPD, which has been the city-state’s major party for 15 years. The Social Democrats won more than 28 percent of the vote in the 2011 election, but they reached 21 percent support in the ARD poll.

When asked which party should lead the Berlin parliament, 41 percent said the SPD, which was a drop of 13 percentage points from the same poll in 2011. Another 17 percent said they did not know.

The CDU also showed a less drastic drop in popularity with 19 percent in the ARD poll, compared to the 23.3 percent they won in the last election.

ARD noted that the low levels of support in the poll for the traditional parties would not make it possible to continue the current SPD-CDU coalition in Berlin – though another coalition would also not be possible.

Other parties, besides the AfD, did see some positive news in the survey. Die Linke (Left Party) came neck-and-neck with the AfD at 15 percent, which was an improvement over the 11.7 percent they won in 2011.

The FDP (Free Democratic Party) failed to make it into the parliament in 2011 with 1.8 percent, but the ARD poll showed they could actually get back into the senate with five percent support.