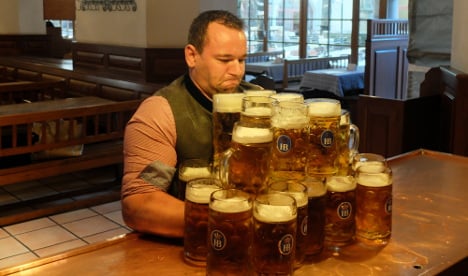 Holding up just one litre – or Maß – of beer at Munich’s Oktoberfest is a challenge by itself, especially after having more than one – the sheer weight of the heavy glass mug may start to bruise your hand.

But one brave Bavarian is determined to break the world record by carrying 29 Maßkrüge, weighing some 70 kilos.

Matthias Völkl, 26, will on Monday attempt to transport this weight across 40 metres through Munich’s famous Hofbräuhaus beer hall, before the start of Oktoberfest the following weekend.

Völkl has been training hard for the challenge, going to the gym four times a week and practising by carrying his female colleagues through the Hofbräuhaus, where he works.

“I have already managed to do it, and I’m in good spirits about it,” said the young man from Deggendorf.

The previous record-holder is fellow German Oliver Strümpfel, who managed to haul an impressive 25 Maßkrüge over 40 metres in 2014.

The current record for women is 19 beer mugs, carried by – of course – another German, Anita Schwarz.

And Völkl’s secret to his presumed success in beating Strümpfel?