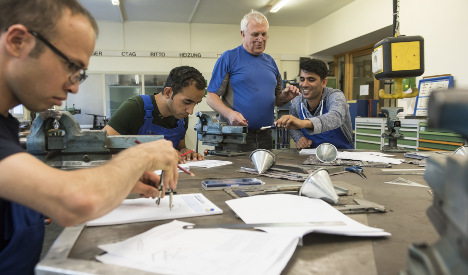 Some 71 percent of refugees in Germany are overqualified for their work, compared to an EU average of 60 percent, according to a working paper released on Wednesday by the European Commission and the Organisation for Economic Co-operation and Development (OECD).

The figures were based on comparing the job requirements for refugees’ occupations to their actual qualifications. But when refugee workers were asked personally whether they felt they were overqualified, 54 percent in Germany said yes, compared to 57 percent EU-wide.

Refugees are also more overqualified than other groups of immigrants in Germany: 38 percent of non-EU born employees work in jobs that are below their level of qualifications, compared to 30 percent EU-wide.

And there’s an even starker contrast when looking at the native German population: 16 percent of locals in Germany are overqualified for their jobs, while the EU average is 21 percent.

The OECD used data from 2014, before Germany saw a huge uptick in asylum seekers in 2015.

While refugees in Germany might be overqualified, the report praised Germany for being on the right track of integrating refugees into the job market.

“The refugee crisis is an opportunity to significantly improve the system for integration,” said OECD job market expert Thomas Liebig.

The report also looked at refugees’ language skills, which it noted are important for integration and the job market. Across Europe, less than half had advanced knowledge of the local language, compared to two-thirds of other immigrant groups.

In Germany, only 9 percent of refugees who had lived in the country for up to ten years had an advanced level of German. But this is hard to compare to countries like Spain where most of the refugees come from Latin America and the percentage there was 98 percent who had advanced Spanish.

Still, over time refugees in Germany do seem to take on the language: about half of all refugees who had lived in Germany longer than ten years had advanced German skills.

The situation for female refugees in Germany can be more difficult: their employment rate is 45 percent on average, which is 17 percentage points below men.

But at the same time, of refugee women who came to Germany between 1999 and 2014, every fourth woman had some form of post-secondary education, such as university – this was four percentage points higher than men.

Still, about half of these women had low-level education, which was higher than the amount of men with this level.

The report also noted the importance of gaining citizenship for integration. Germany was behind the rest of the EU in this area, making it the “only major exception” among the countries accepting the most refugees.

On average across the EU, 61 percent of people who had arrived as refugees became citizens after ten years. But in Germany, this percentage was 40 percent.