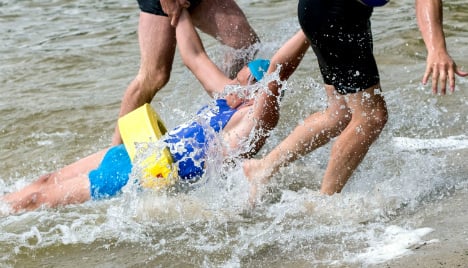 In the first eight months of 2016, 425 people drowned, either at sea, in lakes or in swimming pools. This figure was an increase of 46 deaths on the whole of last year.

Particularly striking is the fact that 56 of the dead in this year’s figures were refugees – more than 13 percent of the total.

Some local communities have started offering swimming courses for refugees, recognizing that many of them arrive in Germany without having learned in their home countries.

The DLRG already tried to raise the alarm about the danger to refugees at the end of last year after 25 asylum seekers drowned.

“Most of the refugees came at the end of 2015. That explains why the numbers in 2016 have been so alarming.”

Berthold Schmitt, head of the German Swimming Pool Association told Die Welt that refugees are considered a high risk group by guards.
“Our guards describe how groups of men go to the edge of the pool and then jump in at the deep end thinking they can stand there. Two seconds later the guard has to jump in after them. That is something we see a lot because refugees completely overestimate themselves.”

The DLRG also assume that there were considerably more drownings in Germany this year, but they weren’t included in the numbers because they never made it into newspapers.

“The patchy weather in August stopped the number of drownings from being even higher,” said DLRG boss Hans-Hubert Hatje.

But the association also warns that the number of drownings could still rise considerably as Germany experiences a warm and sunny early autumn.

The DLRG says that it has done as much as it could to warn refugees of the dangers of swimming, including translating guidelines into 25 languages.

“This summer we have created pictorial guides for how to swim safely and have sent them to local communities nationwide,” Hatje said.

Over three quarters of the total number of dead were male, a fact the DLRG said is due to men more often overestimating their own ability, being more prone to acts of foolishness, or being intoxicated with alcohol.

The southern state of Bavaria was the place where most drownings have taken place, at 77. In North Rhine-Westphalia, Germany’s most populous state, 62 people have drowned so far this year.

The Baltic coast states of Schleswig-Holstein and Mecklenburg-Western Pomerania by contrast saw fewer incidents, with only 39 drownings between them. According to the DLRG, swimming in the Baltic is relatively safe in comparison with inland lakes, as the coastline is watched by lifeguards.