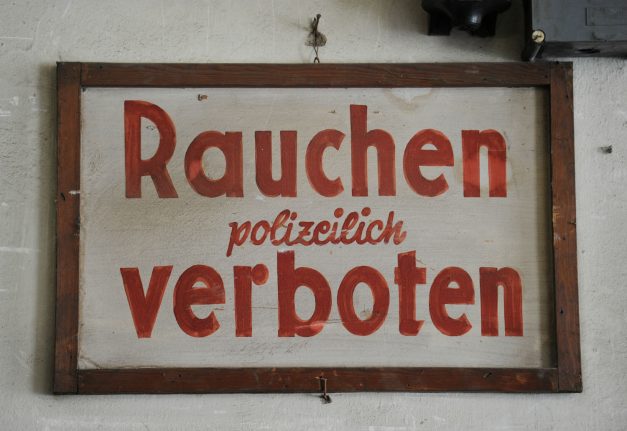 "Smoking is forbidden" - okay, this one makes sense. Photo: DPA

Germans are notoriously law-abiding people and have rules for even the smallest of things. We bring you seven which exemplify German fastidiousness when it comes to public behaviour.

1. Being unconscious at your wedding

You’re not likely to get stuck with the drunk-wedding-in-Las-Vegas type of spouse in Germany.

A section of the German law states that a marriage is invalid if one marital partner isn’t actually aware that he or she is being wed or is unconscious during the proceeding.

So if you want to trick your crush into a life-long bond, you’ll have to find a different way.

Germany is the place to be if you want to walk in the foot steps of the Manhattan Project, which tested the first atomic bomb in New Mexico, US on July 16th 1945.

Sure, you’ll most likely spend five years in prison for causing a nuclear explosion, according German law.

But what’s that compared to the fun of building your own little nuclear reactor and planning the conquest of the world?

3. Beware of the chimney sweep! Many Germans find this frustrating as – particularly in the cities – they don't have chimneys nor can remember a time when their houses had them.

The chimney sweeps are now supposed to check carbon monoxide levels and clean away soot, but most houses heat with natural gas, which doesn't produce either.

4. Bodies must be buried in cemeteries

Even if you die, German legislation doesn't quite let go off you.

In most German states, dead bodies have to be buried within the confines of a cemetery, according to the so called Friedhofspflicht (cemetery obligation). The only exception is a burial at sea.

That means that, even if the deceased has been cremated, his or her remains must still be placed in a cemetery. For this reason, many families take their loved ones to Switzerland for cremation, where the handing over of the ashes to the family counts as “burial” and they may therefore keep them wherever they want.

In 2015, the northern city-state of Bremen became the first German state to implement a less strict law concerning the laying to rest of the departed. Residents of the city can now disperse the ashes of the dead on private property.

5. No drilling on Sundays You may want to save putting up that picture for another day. Photo: DPA

Germans take their day of rest very seriously. Shops are shut, people take leisurely walks and there will be absolutely no domestic drilling, thank you very much.

While it is not exactly against German law, it is against most Hausordnungen (rules of the house) to do so.

Many Hausordnungen also forbid you from throwing glass bottles into the recycling bin at certain hours.

6. No mowing on Sundays either

In the same vein, mowing your lawn on the last day of the week is strengstens verboten (strictly forbidden).

If you decide to go ahead and trim the grass on a Sunday regardless, it may cost you up to €50,000, according to German law.

So those who work six days a week may soon find their tidy yard turning into a wild jungle.