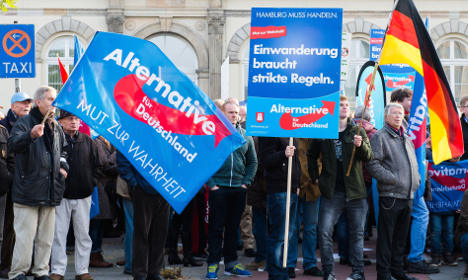 Sunday’s election in the northeast state of Mecklenburg-Western Pomerania, where Merkel still holds a national parliament seat, was called the “beginning of the end of Merkel’s era” by members of the far-right Alternative for Germany (AfD).

The AfD certainly beat out Merkel’s CDU, gaining more than 20 percent of the vote, compared to 19 percent for the CDU, which lost two of its seats in the 71-seat parliament.

As the AfD’s anti-immigrant rhetoric seems to have helped it ride a wave of mounting discontent over Merkel’s pro-refugee policies, some have questioned what the state election bodes for national elections next year.

But does the AfD's gain in a state of 1.6 million – one of the smallest states in country – really mean the far-right group will bring about the end of Merkel and her party? Probably not.

Here are five points to consider when looking at Sunday’s results.

1. The CDU has long been on its way out in Mecklenburg-Western Pomerania

The CDU’s loss this weekend in the northeastern state is not so much a sudden blow as it is a part of a more gradual downward trend.

Since Germany reunited in 1990 and the former East German state held its first elections thereafter, the CDU has lost nearly half of its number of seats in the state parliament: In 1990, it had 29 seats, and after the Sunday elections, it will have 16.

The CDU saw their biggest loss in the 1998 elections of six seats to the Social Democrats (SPD) and the left-wing PDS (Party of Democratic Socialism), which was the legal successor to the former East German government’s reigning socialist party.

2. The CDU were not the 'biggest losers'

While much of the media focus following Sunday's election has been on the CDU's loss of votes, it was not just the conservative party that felt a blow.

On the far opposite side of the political spectrum, Die Linke (Left Party) had the biggest fall, tumbling 5.2 percentage points compared to the 2011 election and losing three seats.

The Social Democrats may have held onto their place as the largest party in the state parliament, but they still lost five percentage points compared to 2011 and one seat.

And the other party to be wiped off the map was the far-right NPD party.

As CDU General Secretary Peter Tauber noted on Twitter: “All parties lost yesterday” – not just his own.

3. Most of AfD’s supporters were traditionally non-voters

While the AfD did manage to secure votes from former CDU supporters, the largest group of people to back the anti-immigrant party were traditionally non-voters.

Forschungsgruppe Wahlen also estimated that about one in three (34 percent) of those who voted for the AfD were traditionally non-voters or unaffiliated.

4. The AfD may have a hard time making an impact in the state parliament

And even with the AfD's 18 seats, it will still have to contend with the three other long-established parties that do not look keen to work with it: the SPD, the CDU and Die Linke.

On Monday, state CDU deputy chair Uta-Maria Kuder called for her party to remain in the current coalition with the SPD.

The leader of Die Linke in the state, Bernd Riexinger, also told broadcaster ARD that he would not rule out forming a coalition with the SPD.

Minister President Erwin Sellering of the SPD has said both the CDU and Die Linke are viable options for a coalition.

The AfD’s support nationally is not as high as it was in the Mecklenburg-Western Pomerania election, but the party has been gaining ground.

In the most recent poll by public broadcaster ARD for September, 14 percent of respondents nationwide said they would vote for the AfD, while the CDU and sister party CSU reached 33 percent together.

This is quite a leap for the AfD, which at the same time last year had support from just 4 percent of respondents – still below the five percent threshold needed to make it into the Bundestag (German parliament). The Union (CDU and CSU) had 42 percent support at that time.

But while Merkel in recent polls reached her lowest approval rating in five years at 45 percent satisfaction, the AfD's leader Frauke Petry is one of the least liked politicians, currently with 14 percent approval – a figure which has barely budged since the beginning of the year when she was at 12 percent.

Still, leading German Jewish figure Charlotte Knobloch called the AfD’s recent success a “nightmare come true,” saying it was a threat to the democratic order of the country.

But national daily Tageszeitung (Taz) emphasized on Monday that the party is still supported by just a minority of voters nationwide.

“After the election on Sunday, the temptation is to pack the whole country into the drawer of right-wing extremism. That would be wrong. It is not the whole country. It is only… …around ten percent,” the newspaper wrote.

“In Mecklenburg-Western Pomerania many people who have now voted for the AfD complain that they have been forgotten… It is the task of politicians to improve the living conditions of the people. Paying attention to local problems, to resolving small conflicts, that is needed now urgently to gain tolerance.”