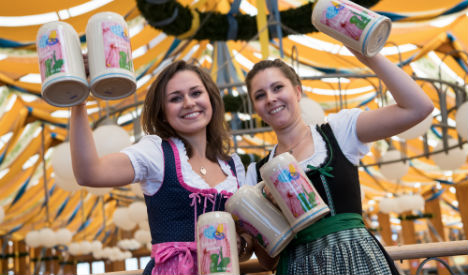 Soon again, we can hear you! #lollaberlin #festival #berlin #treptowerpark

It’s back-to-school time, but the festival season is far from over.

Get yourself down to Treptower Park to hear a stellar lineup of bands including Radiohead, Kings of Leon, New Order and The 1975.

Snap up your ticket as soon as possible as they’re selling fast.

Prepare to be amazed as the sky explodes into glorious colour, when amazing fireworks cast a beautiful glow over the Rhine river and surrounding landmarks.

Meanwhile, a flotilla of 50 illuminated boats will cruise serenely down the river, creating stunning reflections on the water.

The displays will take place on September 10th in Oberwesel and on the 27th in St Goarshausen.

Accompanying the fireworks, there will be live music and a wine festival – what’s not to love?

Simply watch the spectacle from the riverbanks or you can buy a boat-trip ticket here for the 10th or here for the 27th.

Bookworms out there won’t want to miss a trip to this festival, where renowned authors of poetry and prose will display their work.

This year, the festival boasts around 200 authors from over 40 different countries.

From presentations on science to reflections on current political issues, there’s something for everyone.

Kids will love it, too – there’s an International Children’s and Young Adult Literature section, where authors and illustrators from across the globe will present their books in interactive workshops and school projects.

Grab your paint powder and an old T-shirt to join crowds of revellers surrounded by a cloud of rainbow-coloured mist.

Today it is widely celebrated in cities all over the world where thousands of people gather to bust out some moves and get colourful with paint.

DJs like Topic, Honka and Izzy Tricks will be playing great tunes from noon until 10pm.

Buy your ticket quickly because they’re nearly sold out. Bavaria’s legendary folk festival, referred to by locals as “die Wiesn”, is a must-visit.

Each year, more than 6 million visitors from all over the world flock to experience Munich’s traditional folk music, drink German beer, watch traditional dance, visit the funfair, and have a good knees-up with their friends.

Berlin also has its very own Oktoberfest, running from September 23rd to October 16th at Kurt-Schumacher-Damm.

So if you want to feel like a true German, get your Lederhosen or Dirndl on, buy yourself some Wurst and a Bier, and enjoy the party! The biggest wine festival in the world takes place in the small German town of Dürkheim in Rhineland-Palatinate and this year it's gloriously celebrating its 600-year-anniversary.

While its name suggests a party around German sausage traditions, the Dürkheimer Wurstarkt has recently attracted 600,000 thirsty visitors.

Pour out that old beer glass of yours and let some of the 300 wines and champagnes on offer delight your palate.

On September 25th, 40,000 runners from 100 different nations will race through the German capital for the 43rd BMW Berlin Marathon.

Live bands will be playing along the track, as the athletes are taking on the 42 kilometres.

While the starting places have long been taken, it’s not too late for you to cheer for the contestants among a crowd of over one million people and turn this sports day into a party.