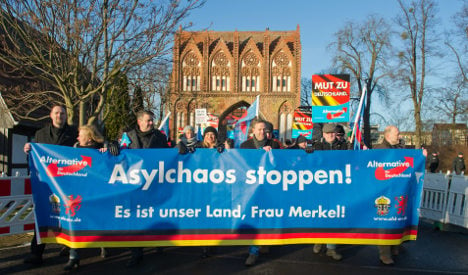 An AfD rally in Mecklenburg-Western Pomerania, with a sign reading "Stop asylum chaos! This is our land, Ms. Merkel!" Photo: DPA.

“If we want to feel like we're still in Germany, we need to send a stop signal,” cried an AfD candidate, Lars Löwe, on the campaign stump at Wismar, a Baltic coast town of 42,000 inhabitants.

Around 300 mostly middle-aged people and pensioners listened attentively at the rally a week before the vote in Mecklenburg-Western Pomerania state, while tourists strolled by, admiring the seaside view with sailboats bobbing in the distance.

Dozens of anti-fascist activists had also gathered nearby, waving banners like “Refugees welcome” and “Fck Nzs”.

The arrival of around a million asylum seekers in the country in 2015 has had a profound impact on Germany's political and social landscape.

And analysts predict a voter backlash against the influx will be amplified in the state in Germany's former communist east, the country's least populous and poorest, which in 2006 elected members of the neo-Nazi party NPD to its regional parliament.

Take a stroll around any of the state's key cities, like Rostock, state capital Schwerin or Chancellor Angela Merkel's constituency Stralsund, and there is little sign of the many refugees Germany has taken in over the past year.

After all, the state accepted only a relatively small number under a quota system based on income and population – 25,000 asylum seekers last year.

Few of them have stayed, with most seeking greater opportunities to work and study elsewhere.

Nevertheless, up and down the state, the talk is all about Germany's refugee influx.

“The people have the impression that we have the reception of refugees under control here, but not in the rest of the country,” said Gabriele Sauerbier, who was campaigning at the Wismar street market for the far-left party Die Linke.

Jürgen Joost, secretary general of Alfa, a splinter party that broke away from the AfD last year, charged that Merkel is to blame for the rise of the populist group.

With her decision a year ago to open the German borders to Syrian refugees then stuck in Hungary, “Merkel resuscitated the AfD, which had been left for dead,” he said.

The AfD, or Alternative for Germany, had started life as an anti-euro party but lost steam as the single currency bloc overcame the debt crisis.

Instead it turned anti-migrant, a strategy that has helped it score strong results in three state elections this year.

In the latest pre-election opinion surveys, the AfD was polling at 21 percent, within reach of Merkel's CDU at 22 percent and the Social Democrats (SPD) at 28 percent.

'They listen to us'

On the campaign trail, the CDU's candidate Frieder Weinhold sought valiantly to sell the state government's record in bringing down the unemployment rate – which has halved in a decade to around 10 percent.

He also pointed out that start-ups and wind farms have sprouted along the coast, signs that a new and sustainable economy has been taking root.

But even he conceded that Merkel “should have been a bit more prudent” on the question of refugees.

Die Linke's politicians argue that the root of the people's concerns remains the German “east-west divide” on income, including pensions, with the east still lagging behind a quarter of a century after reunification.

That is why there is such anger when the government diverts funds to other causes, like hosting refugees, said Horst Lutz, one of the far-left party's leaders.

The AfD, unapologetic about being a one-issue party, is seeking to scoop up the protest vote from those disillusioned by the political elite.

Party supporter Hans Juergen said: “At least the AfD listens to us. If something's not right in Germany, we have to take action.”