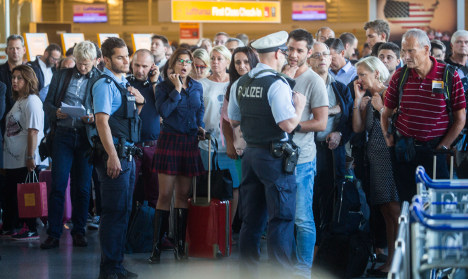 Frankfurt airport on Wednesday amid the security alert. Photo: DPA.

Frankfurt airport was partially evacuated for several hours on Wednesday morning after officials realized that someone had managed to slip past the proper security checks. About 100 flights were cancelled due to the security alert and others were delayed.

Police ultimately found the woman who had evaded security and discovered that she had misunderstood the security process.

Bild reported that the woman had been travelling from Istanbul to New York and that Frankfurt was her transfer point. Altenhofen would not confirm this to local broadcaster Hessischer Rundfunk, but did say that passengers transferring from a location outside of the EU are checked again.

“It seems as though it was a misunderstanding,” Altenhofen told the broadcaster of the 25-year-old woman.

Once authorities realized that someone had made it past security, they said there was no other option but to evacuate gates A and A+ of Terminal 1, affecting some 10,000 passengers and workers. Initially airport workers thought the woman had deliberately left the security area, FAZ reports.

“Security must be the top priority,” said Altenhofen.

All passengers had to be checked back through security, including those who were already sitting on their planes.

FAZ reports that police were able to locate the woman at around noon through surveillance footage. They questioned her into the late afternoon, but did not find any evidence of criminal intent.

After police had found the woman, travelers were again allowed back into the terminal.

About 100 flights were cancelled due to the alert and there were still delays into the evening.

Lufthansa offered domestic passengers the ability to travel by train with Deutsche Bahn instead.