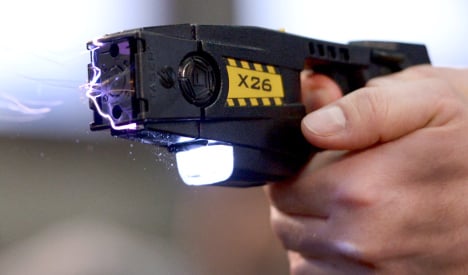 This would make Berlin the first German state to give tasers to regular police officers, according to the Süddeutsche Zeitung: generally only special police units called into serious risk situations carry these guns.

There has long been a debate in Germany about whether wider use of tasers could reduce the use of other deadlier weapons by police, or whether they may in fact increase the use of force. There is also concern about taser guns’ potential to kill people with heart problems.

Police chief Klaus Kandt is set to announce Henkel’s taser plan on Wednesday, Berliner Zeitung reported, though the number and cost of the weapons was not yet known.

But police association groups warned that new tasers must also come with new training for how to properly use them. A spokesman for a local branch of police union GdP also told Berliner Zeitung that tasers could not replace guns.

Another representative from the German Association of Criminal Authorities said that tasers should only be reserved for certain situations.

Others said that Henkel’s idea was an apparent political move given Berlin’s upcoming election in September.

“This is one of the latest acts of desperation from Henkel,” said Berlin Green Party leader Ramona Pop. “Instead of taking care of the basic equipment for police, he’s making it into an electoral spectacle.”