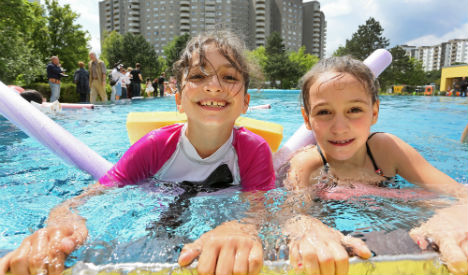 With the beginning of the school year around the corner, Berlin writer Max Bringmann dwells on his fondest memories of life at Grundschule (German primary school).

Here are the five things German kids do during their first years of school that he says will make your heart melt.

A boy and his Schultüte. Photo: DPA

Leafing through your German friends' school pictures, you’ll quickly come across photos of them clinging to something that looks like a colourful, over-sized wizard's hat.

Parents stuff these Schultüten (school bags) with huge amounts of candy, lollipops, and other tooth-rotting goodies to celebrate the beginning of their young one’s school career.

Fighting over who’s got the biggest Schultüte is often how children make friends in first grade.

In fact, getting their hands on this cone of treats is practically the only reason a Kindergarten kid agrees to “zur Schule gehen” (going to school) in the first place.

Little do they know that, once they’re in, there’s hardly a way out for the next twelve years. If you ever send your child to a German school, you’ll realise that most teachers train kids to walk in pairs whenever they go on excursion.

Once the children pick their walking partner, things get intimate pretty quickly.

When German kids go on excursions, they hold hands so as not to lose one another – which makes for the super-cute sight of them scurrying down the street in neat little lines.

But be advised: your kid had better choose their walking mate wisely. They won’t want to be holding the paw of a sweaty kid or be keeping another one’s strangely cold hand at a healthy temperature. If you want to catch a free session of little children singing, you might want to send your kid to a Christian school and wait for November 11th.

St. Martin’s day is a Christian holiday honouring Martin von Tours, who was born in Hungary in the 4th century. The story goes that Martin, a military man, once met a freezing beggar, cut his coat in two with his sword and gave it to the poor man, who later turned out to be Jesus Christ.

While many may not know the story behind the march, kids are usually just happy with crafting their own little lantern. Some even get to have St. Martin’s duck for dinner afterwards. At many German primary schools, pupils are obliged to take swimming classes for at least one year.

That doesn’t mean your kid will turn into a little Olympian within 12 months. Some learners are even content with letting their floaties keep them above water.

In the meantime, others try to earn a swimming badge. The levels of swimming skill range from Seahorse to Gold level. And while that Seahorse badge may look cool on your kids’ swimming trunks at first, they’ll find it boring once they’ve seen the Gold one.

But while the requirements for Gold are clearly beyond the capabilities of a 10-year-old, they can still go for the versatility swimmer's title, for which they'll be tested in a variety of swimming techniques.

At the end of it, they'll get a cute badge in the shape of a seal.

To many German pupils, the class trip in primary school is the first time they leave their parents’ house for longer than a night of slumber partying at a friend’s place.

While most of those trips don’t go farther than a village two hours away, to the kids it feels like globe trotting.

Needless to say, many a tear has been shed and many a sheet been wet over leaving mummy and daddy for such a long time.

The moments before the bus departs often turn into dramatic, apocalypse-style goodbye-scenarios.

But two minutes into the trip, the kids are busy jostling over a window seat and have usually forgotten about their parents.

At school trips, your kids will get to do such wild things as visiting their first children’s disco and secretly staying up until 9.30pm. Maybe they’ll even get to hold their crushes hand for a bit – even without a teacher forcing them too.