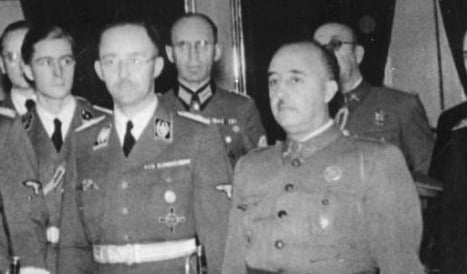 Ancient artefacts dug up from the soil near Segovia were given to Heinrich Himmler when he visited Madrid in 1940 to meet with General Francisco Franco to help support Nazi theories on the Aryan race.

Gold and bronze artefacts as well as hundreds of bones excavated from a Visigoth necropolis outside the village of Castiltierra were handed over to the Reichsführer-SS so that they could be studied in Germany.

The artefacts date from the time when Spain was ruled by Visigoths, Germanic tribes who occupied the Iberian peninsula between the 5th and 8th centuries before being ousted by the Moors – the Umayyad Caliphate – in the year 711.

The gifts were handed over to the Nazis by Julio Martínez Santa-Olalla, a Falange card-carrying archaeologist who wanted to show that the migration of the Visigoths demonstrated racial links between Spain and Germany.

So keen was he to impress the head of the Waffen-SS that the archaeologist even demanded that particular workers be present at the Visigoth site on a proposed visit by Himmler to the region.

“They searched the region for tall blonde workers so that Himmler could see the Germanic trace,” explained Francisco Gracia, professor of prehistory at the University of Barcelona, in an interview with El Pais.

In the end Himmler’s trip to Castiltierra was aborted due to poor weather, but the artefacts were presented to Himmler’s staff and then sent by diplomatic bag to Berlin where they were reportedly distributed to museum collections in Nuremberg, Cologne and Vienna.

But now, over three-quarters of a century later, Spain is preparing to request that German and Austrian authorities return the artefacts so that they can be displayed together in Madrid’s National Archaeological Museum.

Sergio Vidal, head of medieval antiquities at the National Archaeological Museum, said that Castiltierra was one of the most important examples in Spain of the Visigoth period.

“Dozens of pieces were sent to Germany and they never returned. Now we are trying to find evidence to show that the material was sent to Germany on a temporary basis,” Vidal told El Pais.

However, the task is fraught with difficulties, as no proper inventory of the artefacts exists on the Spanish side or correct records of where they were distributed to in Germany.