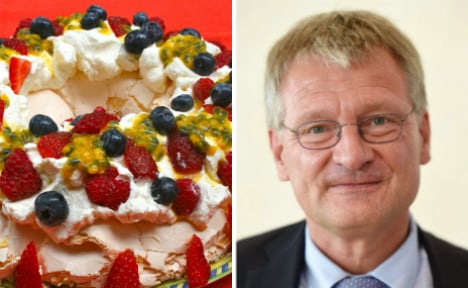 Jörg Meuthen, co-leader of the far-right Alternative for Germany (AfD), was speaking at an event in Harburg, Lower Saxony, when the attack happened. A 17-year-old got up out of the crowd and threw the frozen dessert at the politician, who was struck on the head.

Police report that he was lightly injured in the incident and that after receiving medical care for a few minutes, he was able to continue his speech.

The culprit was caught by security guards as he tried to flee the scene along with a group of other activists who had tried to disrupt the event by shouting political slogans and unfurling a political banner.

The teenager is reported to belong to the far-left scene and is now being investigated for attempted serious bodily harm.

Meuthen said that the attack was “cowardly and dangerous” and that “it had been well organized,” according to broadcaster N-tv.

“I was lucky that the assailant didn’t properly hit me, otherwise I would most certainly be lying in hospital right now.”

The Alternative for Germany were founded in 2013 as a anti-euro party. Since then they have become more right-wing and have increased in popularity through their staunchly anti-refugee stance.

So far they have received at least ten percent of the vote in five of Germany’s 16 state parliaments.

Meuthen belongs to the more moderate wing of the party and recently split the AfD’s representation in the Baden-Württemberg state parliament in two in a row over anti-Semitism.

The party leader was furious that one of his colleagues had described Holocaust deniers as “dissidents” and broke away from the parliamentary faction along with 12 colleagues.