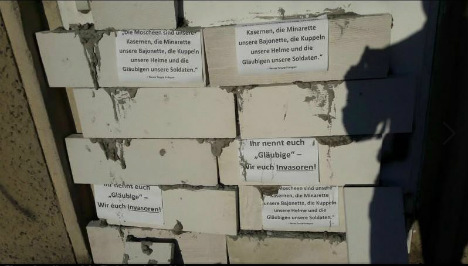 Police in Mecklenburg-Western Pomerania have opened an investigation after the 1 metre-high brick work was found in the doorway of the mosque, which is currently under construction, on the morning of August 26th, a police report states.

According to broadcaster NDR, police are investigating two charges – one of property damage, the other of incitement of hatred.

One of the flyers seen on a Facebook picture posted by the Parchim Refugee Network reads: “You call yourselves believers. We call you invaders.”

Another is an alleged quote from Turkish President Recep Tayyip Erdogan, which reads: “The mosques are our barracks, the minarets our bayonets, the believers our soldiers.”

Hate crimes across Germany rose dramatically in 2015 after Germany took in a massive influx of refugees. Islamophobia has also become much more widespread, a recent study shows.