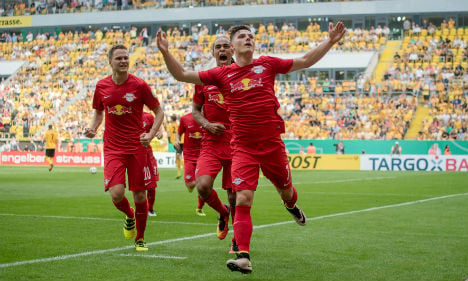 For the 2016/17 season, the Bundesliga will finally have a club from former East Germany for the first time since Energie Cottbus were relegated in 2009 – the year RB Leipzig was founded.

Leipzig is where the German Football Association (DFB) was founded and, since the Berlin Wall came down in 1989, had never had a team in Germany's top-flight.

But there will be no warm welcome from rival fans for Sunday's first match at Hoffenheim.

In an extreme example, a severed bull's head was thrown onto the pitch by fans of second-division Dynamo Dresden during last Saturday's German Cup first-round away defeat.

Banners reading 'Kill the Bulls' and 'Red Bull deserves beatings' on display in Dresden were typical of those seen around German grounds when RB Leipzig play away.

The level of hostility shown towards the German league new boys is more than just petty jealousy from former second division rivals.

Some fans of Borussia Dortmund, who will be the first Bundesliga club to visit Leipzig's Red Bull Arena on September 10, plan to boycott the game.

There is little respect from within German football to the considerable feat of having earned four promotions in seven years with a team lacking star signings.

“You don't have to like us, but no one will knock us off our path,” said RB Leipzig's director of sport Ralf Rangnick defiantly.

RB Leipzig is seen as the embodiment of the commercialism that the average German fans loathes.

The new kids on the Bundesliga block have endless cash reserves and are bankrolled by Austrian billionaire Mateschitz.

The club was only founded in 2009 – when Red Bull bought the licence from fifth-division minnows SSV Markranstadt – and RasenBallsport (GrassBallsport) Leipzig was born.

'RasenBallsport' is a fabricated German word, an unsubtle way of getting around Red Bull's problem that, under German Football League (DFL) rules, a team may not carry a sponsor's name.

They also navigated their way around the DFL's '50+1' rule to prevent any individual having a controlling stake in a club.

Red Bull owns 49 percent of RB Leipzig, but the remaining 51 percent is owned by employees of the Austrian drinks firm.

Such rule-bending means RB Leipzig has been dealing with hostility from within German football since they started life seven years ago.

“This club is not my favourite and never will be,” said Dortmund's CEO Hans-Joachim Watzke tersely.

Despite achieving Bundesliga status, the club has resisted the urge to bring in a big-name signing for their debut.

Werder Bremen's Davie Selkie joined in 2015 and was the club's top scorer with a modest 10 goals in 30 games as they finished second in last season's second division behind Freiburg.

Centre-back Marvin Compper won his single cap for Germany back in 2009.

They have an impressive youth system, which produced Bayern Munich and Germany defender Joshua Kimmich.

Their deep resources means some fans feel they could be a threat to Bayern's dominance of the German league.

“I don't want to be 80 by the time RB win their first Bundesliga title,” said Mateschitz last year, giving the club eight years to lift the German league trophy.

Bayern's chairman Karl-Heinz Rummenigge was reserved in his welcome of the Bundesliga new boys.

“But I believe that fans from the east would have been more pleased if Dynamo Dresden had done it.”

However, the Bayern boss was emphatic when asked when RB Leipzig would win their first Bundesliga title. “I will never see that happen,” he snapped.